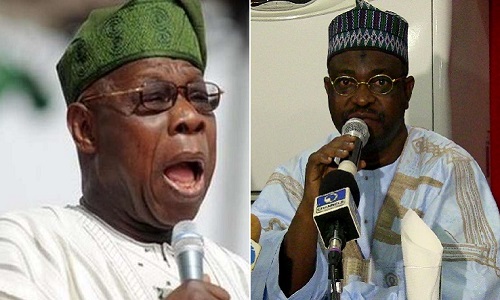 Former Speaker of House of Representatives, Hon. Ghali Umar Na’Abba, has replied former President Olusegun Obasanjo on his allegation that members of the National Assembly are corrupt.

Mr. Obasanjo had during his most recent visit to President Muhammadu Buhari at the Presidential Villa, Abuja, reiterated his oft-repeated stance that the National Assembly was a den of thieves. This was even before the budget padding scandal currently rocking the House of Reps unfolded.

Firing back at the former president for describing an institution he once headed as corrupt and full of thieves, Mr. Na’Abba, described the Owu chief as one of the most corrupt Nigerians.

Speaking when he fielded questions from newsmen on Sunday in Abuja, the former Speaker, who had a running battle with Mr. Obasanjo when they were both in power, asked the former president to explain to Nigerians how he became one of the richest Nigerians after leaving office, when he had virtually nothing before he assumed office.

Mr. Na’Abba recalled that as Speaker of the House of Representatives, he had cause to take Obasanjo on various expenditure offences he committed that the former president could not defend.

“As the Speaker, I took Obasanjo on various expenditure offences which he committed, which he could not defend and didn’t show any remorse. In fact, that is why sometimes in 2002, the National Assembly tried to impeach him”.