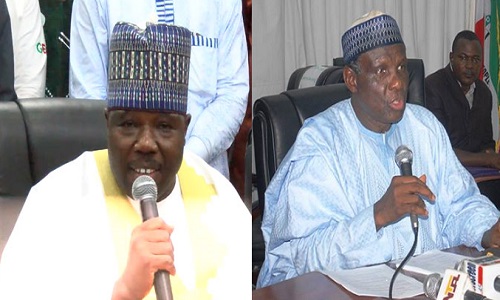 The committee was inaugurated by the party’s Board of Trustees on Monday to proffer a political solution to the leadership tussle between the Ahmed Makarfi-led caretaker committee and Sheriff faction.

There are presently 15 court cases instituted by contending groups within the PDP.

However, indications emerged that the Gana-led committee, which arrived at Sheriff’s office by 7: 45‎ pm and went into a meeting that lasted late in the night, was deadlocked with the embattled factional chairman refusing to yield grounds.

Addressing newsmen at the end of the meeting, Gana, a former Minister of Information, said the meeting deliberated on issues affecting the expected truce and confirmed that another meeting would be held between the reconciliation committee and Sheriff to resolve the crisis.

“I want to confirm that we had a successful meeting where we have taken very serious note of the analysis of the problems causing disaffection within the party. But definitely, there will be need for a second session.

“We take the opportunity of appealing to all members of the PDP across the nation that the issues facing the PDP, we are very much on course. And the desire is that the issues be resolved. So we are looking forward for a second meeting where we will be able to project to the nation the basic solutions that has been agreed on”, he said.

Sheriff also confirmed that all the contentious issues were discussed, stressing that the reconciliation committee members were better informed on the issues during the meeting than before, adding that another meeting would be held to resolve the crisis.