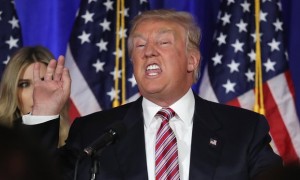 In the latest round of the Hillary-Trump contest, the Republican presidential nominee, Donald Trump called Hillary Clinton “the devil,” referring to her abuse of competitor Bernie Sanders in her race to the top.

Trump, at a Pennsylvania rally made fun of former Democratic contestant Bernie Sanders for endorsing Clinton. “He made a deal with the devil. She’s the devil,” he said.

He also told a crowd in Ohio that he feared the US presidential election in November “is going to be rigged.”

His comments come after a CNN poll released Monday showed Clinton with a 52% to 43% lead over Trump in an head-to-head match-up taken after the Republican and Democratic conventions.

Trump is has also lost popularity after  he made fun of a family who lost a son serving in the US Army.