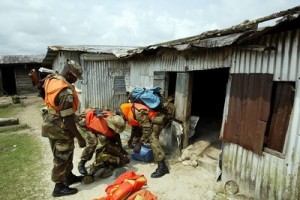 According to a statement issued by the Public Relations Officer (APRO) of the 13 brigade, Nigerian army, Calabar, Captain Kayode Owolabi, the militants were killed after a failed attack on the position of the troops.

According to the statement, the foiled operation was led by wanted leader of the unrepentant militant group, the Bakassi Strike Force, Benjamin Ene, alias G1.

“The very determined troops of 13 brigade and Operation Delta Safe repelled the attack, killing 7 of the militants, some of them wearing Nigerian military camouflage.

The Nigerian army suffered no casualty in the latest incident which is coming few days after a similar attack on its position that allegedly left 5 soldiers and two militants dead.

The commander, of the 13 brigade, Brig. Gen Bulama Biu, has reiterated the Nigerian army’s commitment towards the safety of residents in the area, while thanking and urging them to sustain their support to the military in her fight against militancy.