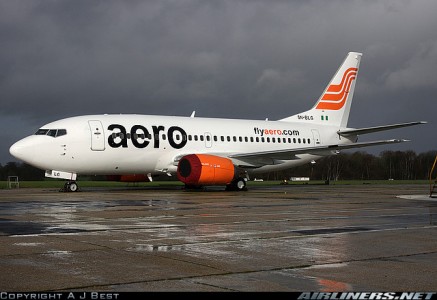 The head office of the beleaguered airline, Aero Contractors, was, at the weekend, besieged by passengers who had bought flight tickets in the hope of traveling at a later date. They were at the office to demand the refund of the sums paid for tickets.

The passengers also stormed the office of the airline at the Murtala Muhammed International Airport (MMIA), Lagos. They, however, met the office locked, as it has been since the airline announced a suspension of its flight operations last week.

When SaharaReporters visited the airline’s terminal on Saturday, it observed that some passengers had booked flights to Accra, Ghana, later this month. Such passengers were shocked to learn that the airline had suspended flight operations to the West African country.

The airline suspended flight operations to Accra in June without informing passengers, who had booked ahead. A few, however, got to know and succeeded in getting their fares refunded.

But since last week when the airline announced the suspension of flight operations, no passenger has been given a refund on fares.

The airline attributed the stoppage of flights in the Lagos-Accra route to non-availability of foreign exchange and a huge reduction of its fleet. Managing Director, Aero Contractors, Captain Fola Akinkuotu, had explained that the airline had only two operational aircraft in its fleet, a far cry from what it had 12 two years ago.

He said most of the aircraft in its fleet had gone for checks and assured that once they were back, they would be deployed to the Accra route and other routes on which it suspended flights.

A passenger, who identified himself as Mr. Adeyemi Adekambi, said he booked in the first week of June to travel to Accra with the airline by 15 September, 15, but only learnt of the suspension of the Accra route last Wednesday in the media.

He complained that he has not been attended to since he has been visiting the airline’s office for a refund and will consider taking legal action.

“None of our local airlines is reliable. There is no airline that can’t have challenges, but you don’t just wake up today and say you are closing operations the following day without putting your clients into consideration.

Some of us even booked on their platform for the next two months, just because we knew that the ticket would be cheaper if we booked ahead. That’s the practice all over the world, but ours is different. They open the shop today and fold up the following day,” he said angrily.

Adekanmbi said he has also been informed that Arik Air is facing similar challenges, but has been blaming flight delays and cancelations on fuel marketers.

Passengers are seeking refund seen to have no hope of getting such from Aero Contractors. A management staff of the airline confided in SaharaReporters that the airline has no plan to give a refund to any passengers who booked ahead.

He explained that the management could only make refund when the airline restarts operations but added that the chances of that happening are very slim.

According to him, Aero had a debt profile of about N50 billion and about 1,500 workforce before it shut down operations last week.

He said the airline was indebted to various agencies including lessors, banks and even the Asset Management Company of Nigeria (AMCON).

For instance, the airline according to the source owes between N18 billion and N20 billion in trade debts, N14 billion to AMCON and N15 billion to fuel marketers and other aviation agencies.

The source explained that the revenues made by the airline on a monthly basis were grossly insufficient to meet its various obligations.