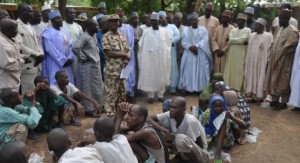 Over 348 detainees have been handed over by the Nigerian Army to the Borno State Government, reports claim.

This was performed during a ceremony in Maiduguri on Saturday, in which the General Officer Commanding 7 Division of the Nigerian Army, Brig.-Gen. Victor Ezugwu, handed over the detainees to Governor Kashim Shettima.

Ezugwu explained that the detainees were arrested in various anti-terrorism operations of the Nigerian Army in Borno.

He said that they were being handed over after going through a process to ensure that they had no relationship with Boko Haram.

He said, “The review of the cases of terrorists suspects in our custody involves a painstaking and continuous process as directed by the Chief of Army Staff who has emplaced measures to guarantee societal and individual fundamental human rights.

“The process ensures that those captured while participating actively or passively in creating sorrow and mayhem in the society are screened out for necessary judicial recourse.”

According to him, those suspected members of the group who have been found innocent are periodically released to continue with their normal lives as law abiding citizens of Nigeria.

He said, “The overall goal is that the just and innocent citizens of Nigeria do not suffer injustice.”

Ezugwu revealed that the detainees were made up of 114 adult male, 107 adult female and 127 children.

He said, “The Nigerian Army have duly investigated all the suspects who were arrested at various camps and found 348 of them innocent of involvement in terrorism.

“They are made up of 114 cleared male suspects, 107 cleared female suspects and 127 children.”

Shettima meanwhile thanked the Nigerian Army for the gesture and promised rehabilitation for the detainees so they could continue with their normal lives.