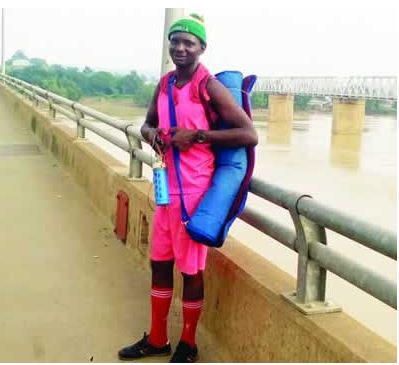 A 26-year-old man, Tunde Agbaje, has reportedly trekked from the Ketu area of Lagos State to Zaria in Kaduna State.

PUNCH Metro learnt that Agbaje, who is the cousin of a former People’s Democratic Party gubernatorial candidate in Lagos State, Jimi Agbaje, went on the adventure to prove his love for a lady, Sharon Donald.

Our correspondent gathered that 26-year-old Donald is the daughter of a former governor of a state in the South-South and had recently travelled to New York, United States of America.

It was learnt that Agbaje and Donald had met in Ikoyi, Lagos State, and had been friends for the past six years, but she had turned down his marriage proposal several times.

Agbaje said he decided to trek to Zaria to prove his love for Donald, adding that he was on the road for 19 days.

The Lagos State indigene was reportedly received on Friday, October 21, by the Chief Security Officer of the Ahmadu Bello University, Col J.K. Tukur; and the protocol office of the Emir of Zaria.

He was later taken to a hospital where he was reportedly treated for the injuries he sustained during the trek, which was monitored by a GPS tracker.

Narrating how he met Donald, Agbaje said, “I was with my friends sometime in 2010 and while we were discussing about ladies, I said I wished God would just show me my wife anytime soon.

“About five minutes later, we were hungry and I went to get food on Awolowo Road. It was my first day at that eatery. I was waiting to be served when she walked in. Coincidentally, that day was also her first day there. I observed that there was a love image at the back of the trousers she put on.

“She approached me and asked what she could buy and I advised her. We later exchanged contacts and became friends. That was how my love for her started growing. We met several times afterwards.”

Agbaje said some months later, he decided to open up on his feelings for Donald, but she turned him down.

He said he persisted, adding that when Donald didn’t bulge, he decided to do “what no man can do for her.”

“I chose to trek to Zaria because her parents dated for six years in ABU, Zaria, before they got married. I didn’t let my parents know and to ensure I was not disturbed, I changed my SIM card. I took a tracker along with me to monitor my movements. I never took a bus at any time. It was a tough task and I even collapsed some of the times. I took off from Ketu on October 2 and arrived in Zaria on Thursday, October 20, around 4.15pm.

“I have no regret for what I have done. I have proved my love for her, even though she didn’t reciprocate my feeling. I believe even if she gets married to another person, nobody will ever be able to do what I did for her,” Agbaje added.

Our correspondent was told that the CSO of ABU, Tukur, called Donald to ask if she was aware of Agbaje’s adventure, which she acknowledged.

She, however, didn’t state if she would accept his proposal.

The head of the protocol office of the Emir of Zaria, Mr. Abubakar Ladan, told our correspondent on the telephone that Agbaje was received at the palace. He added that the emir had stepped out when he arrived.

“I had a brief chat with him and after telling us his mission, we prayed for him and wished him the best,” he added.

When our correspondent contacted Donald, she said she knew Agbaje was embarking on the trek, adding that she warned him against it.

She said she had never had any relationship with him, describing him as a stalker.

She said, “Tunde (Agbaje) has been harassing and stalking me for the past six years and as far as I am concerned, this is just a new escapade in a series of his harassment.

“I met Tunde at a church when I was living in Lagos and we were both part of the youth ministry. He never had a friendship, let alone a relationship, with me. I was in a music group and some of the youths had my phone number, including him.

“He later found out where I lived and came to my house. My mum warned him to leave me alone, but he refused. I changed my phone number and moved to the US, but I don’t know how he got my contact. I have stopped picking calls from Nigeria because of him.

“He later called me and said he was going to trek to prove his love for me in a non-violent way and I told him not to do it because he could die. I said that not because I cared, but just for Christian charity. This guy is mentally unstable, because how can you still be stalking a woman who has turned you down for six years?”