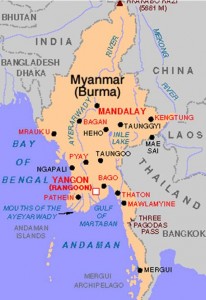 Nine police officers have been killed in an incident when a group of assailants raided a police station and others attacked a border control post in western Myanmar, near the border with Bangladesh.

According to State officials, the assailants, numbering 90, were members of the Muslim minority in the state of Rakhine, where the attacks took place on Sunday.

The attacks began early Sunday morning when the group of men stormed the police station in Maungdow Township, killing six police officers, wounding two others, and seizing a large number of weapons.

One police officer was killed and two wounded in a second attack, taking place at the same time, on a police border patrol camp in Rathidaung Township.

Two more police officers were killed and one missing after a third attack a couple of hours later in Buthidaung Township. Seven of the attackers were reportedly killed in that attack.

Police launched a counteroffensive on Monday, shooting to death seven members of the Rohingya Muslim minority in Maungdow.

“This morning about 6 a.m., the security forces, loaded onto three trucks, arrived in Myothugyi village, a mile east of Maungdaw town, and seven people were gunned down,” U Zaw Oo, a Rohingya in Maungdaw, told the New York Times by telephone on Monday.

“The situation in the town is quiet, and all Muslim residents here are just staying at home since we are very scared of the security forces,” he added.

There are more than 1 million members of the Muslim Rohingya ethnic group living in the state of Rakhine. Most have been denied citizenship in Myanmar, formerly Burma, and Myanmar has refused to recognise them as an ethnic group, insisting they are ethnic Bengalis.