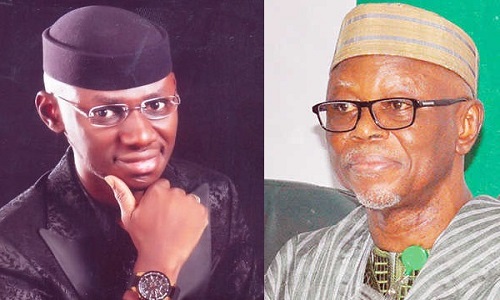 The Deputy National Publicity Secretary of the All Progressives Congress, APC, Comrade Timi Frank, has challenged the party’s National Chairman, Chief John Odigie-Oyegun, to publish the minutes of the National Working Committee (NWC), where the party rejected the report of the Ondo State Primary Appeal Panel.

Mr. Odigie-Oyegun had last week claimed that the report of the appeal panel on the Ondo governorship primary election was “set aside” by the NWC.

In a statement issued in Abuja on Sunday, Frank wondered why it took the national chairman two weeks “to prepare lies as responses”.

According to him, the situation in the party as well as the accusation and counter-accusation have got to a stage where Odigie-Oyegun must publish what he described as “the undoctored minutes of the meeting, if he does not have any skeleton in his cupboard”.

He said: “Unknown to the national chairman, the last two NWC meetings were properly recorded and the record shows the contributions of each and every member of the NWC at the meetings.

“Chief Odigie-Oyegun should tell the world why he brushed aside the suggestion of the National Youth leader Dasuki Jalo, who suggested that the party should submit an interim name to the Independent National Electoral Commission (INEC) pending the time a political solution will be found to the matter.

“But Odigie-Oyegun and few others, who benefited from the corruption that produced Rotimi Akeredolu as governorship candidate did not see wisdom in what the national youth leader said.

“Chief Odigie-Oyegun’s few responses to the many allegations raised by our leader, Asiwaju Bola Tinubu, can never hold water. For example, the chairman and his cohort contradicted themselves when Odigie-Oyegun said there was no voting, but he forgot that the National Vice Chairman Hilliard Eta told reporters that there was voting, which is in agreement with the position of the party’s Southwest National Vice Chairman Chief Pius Akinyelure, who also said the NWC members actually voted on the Ondo State Governorship Appeal Panel Report”.

Mr. Frank quoted the APC national chairman as saying in his response that “voting on the issue became unnecessary and never took place in view of NWC’s rejection of the Appeal Committee’s report, while the Southsouth Vice Chairman Hilliard Eta had said before we met on the last day for the submission of name to INEC, we had met three days earlier. In that meeting, there were two reports before the NWC. That of the appeal committee was voted on. That day, we were 14 in number, not 11 as we have it in the media.

“After that, we mandated our national chairman and secretary to go out and do wider consultations so that we can have a political solution to the heated environment the situation has caused the party”.

He asked: “Now, who is deceiving who? In another clime, Chief Odigie-Oyegun would have voluntarily resigned as the national chairman of APC to allow someone else correct the damage he had done to the ruling party.

“But it is not too late. Our National leader Tinubu has spoken that Odigie-Oyegun should step aside, and that is the opinion of larger percentage of leaders and members of APC. It is expected of our national chairman to do the needful before the evidences of many evils done to the party will be made public”.

He asked all lovers of APC “to disregard Chief Odigie-Oyegun’s made-to-believe-lies because the true position of what transpired at the NWC meeting had been revealed by the National Vice Chairman (Southwest) Chief Pius Akinyelure.