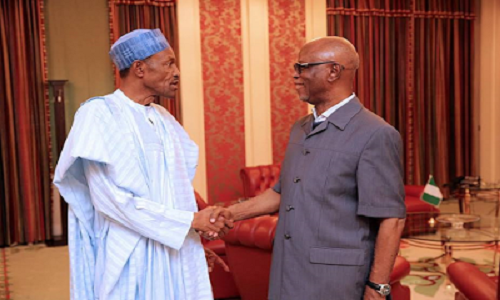 The national chairman of the All Progressives Congress (APC) Chief John Odigie- Oyegun, has described as harsh, the call by a chieftain of the party, Asiwaju Bola Tinubu, for his resignation over the Ondo state gubernatorial primaries.

Mr. Tinubu had called for Oyegun’s resignation about two weeks ago, saying the APC chairman’s comportment regarding the Ondo guber primaries was a classic example of “political treachery and malfeasance of the basest order”.

In his initial response, the APC chair said due to his respect for the former Lagos State governor, he would not join issues with him.

However, emerging from a meeting behind closed doors with President Muhammadu Buhari on Tuesday, Oyegun told State House correspondents that he cannot be removed on the pages of newspapers, adding that the procedure for removing a party’s national chairman is spelt out in the constitution.

Nonetheless, he stressed that he had no rift with Tinubu, saying what happened between them was just a difference of opinion and perception.

“There is no rift with Asiwaju, we have difference of opinion, difference of perception and I think that is normal. Yes, I agree that the nature of the statement was a bit harsh.

“The method of getting rid of a national chairman (of a party), if that is what I will call it, are spelt out in the constitution, they don’t take place on the pages of newspapers”, he said.

On allegations that he sponsored some youth, who protested at the party’s national headquarters in Abuja yesterday against the alleged highhandedness of Mr. Tinubu, the APC national chairman said, “God forbid, anybody who knows me knows that that is not my style. I’m equally shocked and I’m going to look into it and find out why and who is behind it”. 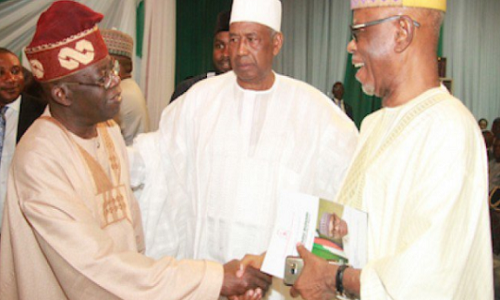 On what he would tell those wondering if the pleasantries he exchanged with the former Lagos governor at Buhari’s biography presentation on Monday were genuine, Oyegun stated: “Do they know how far back our association goes? Do they know that we were in the trenches together in the NADECO days? Why can’t people who have mutual respect for each other have different opinions? All we had was difference of opinions. Yes, it was expressed a bit harshly, but that doesn’t remove the basic fact that we’ve worked together for a very long time”.

Asked to explain what happened in the Ondo guber primaries, Oyegun responded: “What happened is in the report of the chairman of the primaries committee”.

On whether he would make a U-turn on the primaries since it is generating controversies, he said it is only the Independent National Electoral Commission that could do so.