Home Trending Brain Implant Which Allows Paralysed Monkeys To Walk Raises Hope For Human...
Facebook
Twitter
WhatsApp
At least two monkeys with severed spinal cords have been reported to have regained control of their limbs after a new wireless implant was placed in their brains.
Neuroscientists from the Swiss Federal Institute of Technology in Lausanne (EPFL) developed a technology which allows the sending of signals from the brain to the muscles bypassing the damaged part of the spinal cord.

Reuters quoted Gregoire Courtine, a neuroscientist who led the experiment saying, “We developed an implantable, wireless system that operates in real-time and enabled a primate to behave freely, without the constraint of tethered electronics“.

Courtine, who treated two monkeys in China, each with one leg paralysed by a partial spinal cord lesion, explained that he and his team got to understand “how to extract brain signals that encode flexion and extension movements of the leg with a mathematical algorithm.”

They then linked the decoded signals associated with leg movement to particular key points in the lower part of the spine, below the injury. Devices receiving a wireless signal from the brain then generate electrical pulses that activate leg muscles into motion.

With the wireless brain implant in place, both monkeys partially regained the use of their paralysed legs within two weeks of sustaining their injury, without any special training.

“They have demonstrated that the animals can regain not only coordinated but also weight-bearing function, which is important for locomotion. This is great work,” said another neuroscientist, Gaurav Sharma. 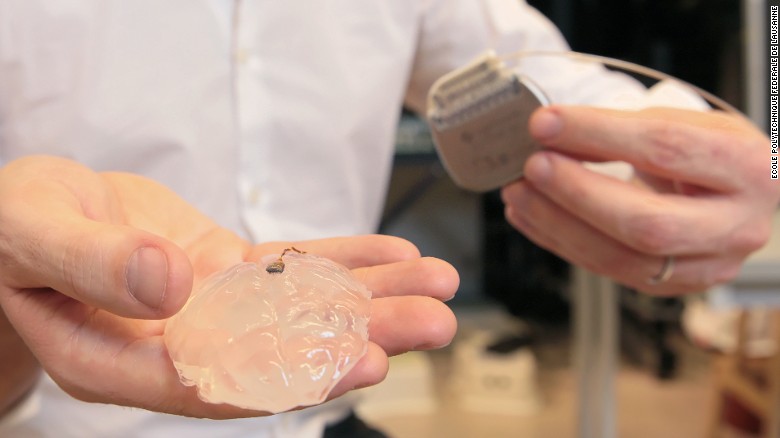 Independent experts not directly involved in the work said it was an important step towards a potential treatment for immobile people.

“In principle this is reproducible in human patients,” a specialist in restorative neuroscience at Imperial College London, Simone Di Giovanni said, adding that the results his Swiss colleagues achieved are “solid, very promising and exciting.”

Although applying the brain-spine interface to the treatment of human patients is more complicated because the human brain decoding is much more complex, according to Courtine, the neuroscientist has already started a trial in two people with spinal-cord injury in Switzerland, using a pared-down version of the technology.