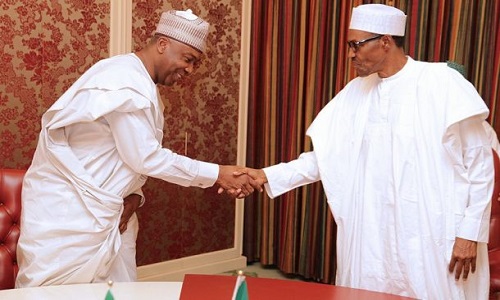 The Senate President, Dr. Bukola Saraki has urged Nigerians not to politicise the $29.9 billion loan request forwarded to the National Assembly by President Muhammadu Buhari for approval.

The Senate on Tuesday rejected the loan request based on lack of detailed information.

The Senate’s action was greeted by suspicion in some quarters as a confirmation of the frosty relationship existing between the Legislative and Executive arms of government.

The Minister of Information, Lai Mohammed had disclosed on Wednesday that the end of the request has not come as it will be re-presented with detailed information to the National Assembly.

Speaking with State House correspondents after observing Juma’at prayer and holding meeting with the president along with some lawmakers on Friday, the Senate president said that the loan request is a work-in-progress.

Asked to speak on the Senate’s relationship with the executive as far as the loan is concerned, Saraki said: “We should not look at that as a reflection of the relationship. Don’t let us politicize very important issues. As we said this is work in progress”.

On the purpose of his visit

to the Presidential Villa, he said: “I came here to pray, I have finished praying and I just had a general felicitation with the President. It didn’t go beyond that”.