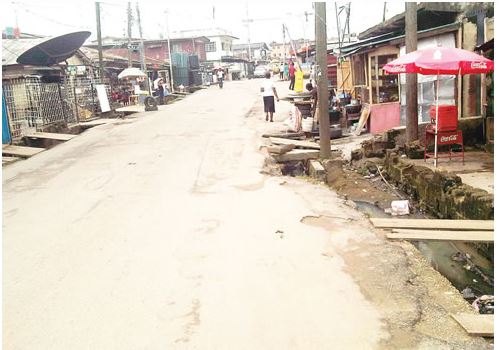 The police in Lagos State have launched a manhunt for two neighbours, identified only as Muhammed and Samuel, who stabbed a man to death during a quarrel in the Somolu area of the state.

Our correspondent learnt that the victim, identified as Christian Ugbaka, was stabbed in the chest while trying to settle a fight between Muhammed and Samuel, who lived on Babylone Street.

PUNCH Metro gathered that 25-year-old Ugbaka, who had visited a friend in the house at about 10pm last Tuesday, met Muhammed and Samuel arguing over Muhammed’s girlfriend, identified simply as Sahadatu.

He reportedly attempted to settle the fight, but was killed during the altercation. The suspects subsequently fled the area.

It was learnt that the matter was reported at the Pedro Police Division, while the operatives took Ugbaka’s corpse to a morgue.

A police source told our correspondent that it was believed that Muhammed owned the dagger used to stab the victim to death.

He said, “It was the girlfriend, Sahadatu, who came to the police station to report that her lover, Muhammed, had stabbed a peacemaker to death.

“On that evening, the occupants were sitting together in front of the house. Sahadatu’s younger sister, Aishat, was also with them. Samuel was said to have had an argument with Sahadatu, during which Samuel slapped Aishat and Sahadatu.

“Mohammed, the boyfriend, was angry and queried Samuel for harassing his girlfriend and her younger sister. It resulted in a scuffle. It was the victim, Ugbaka, who came in at the moment and tried to separate the two men.

“But suddenly, one of the men brought out a dagger and mistakenly stabbed Ugbaka in the chest. We believed that Muhammed inflicted the injuries because the dagger belonged to him.”

PUNCH Metro learnt that Ugbaka was rushed to a private hospital in the area, where he was confirmed dead by a doctor.

A resident of the area, who did not want his name in print, said Muhammed and Samuel fled the house since the day of the incident.

The Lagos State Police Public Relations Officer, SP Dolapo Badmos, said the case had been transferred to the State Department of Criminal Intelligence and Investigation.

She said, “The man’s corpse was deposited at the morgue of the Lagos Mainland Hospital, Yaba, for autopsy. The case had been transferred to the Homicide Section of the SCIID for further investigation.”

In another development, the police are on the trail of two suspected cult members, who shot dead a 22-year-old, Samuel John, in the Ikotun area of the state.

PUNCH Metro learnt that John, at about 4pm on that Tuesday, was hit by bullets from the cult members who were shooting indiscriminately on Governor’s Road.

Our correspondent was told that the gunmen, who came on a motorcycle, shot John in the neck.

A witness, who gave his name only as Cornelius, said the victim was rushed to the General Hospital, Igando, where he died.

A police source told our correspondent that efforts were on to arrest the fleeing suspects.