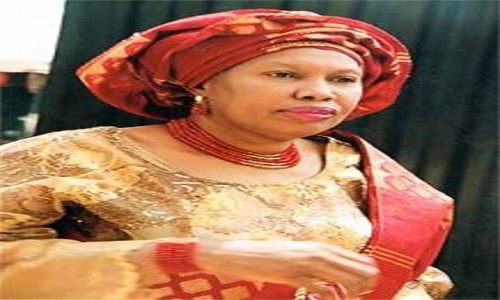 With about three years to the next general elections, a new political party to be called ‘Abundant Blessing Congress’, is set to be floated by an ex-wife of Former President Olusegun Obasanjo, Mrs. Taiwo Obasanjo.

The former Mrs. Obasanjo, who said the decision to float a new party was a divine assignment from God, added that the proposed political party would create a selfless platform for people to come together and become the custodian, part and parcel towards rebuilding this nation.

Taiwo, who spoke in an interview with The Sun newspaper published on Thursday, said “I have a divine assignment from God to come out with something like this. It has a divine agenda. What is the divine agenda? What is the agenda? It is to create a selfless platform for people to come together and become the custodian,   part and parcel towards rebuilding this nation. We shouldn’t leave it to only the government of the day to run. It is going to be a kind of shadow government, that will also externalise itself in all that they want to do for the nation. The Abundant Blessing Congress will also be internalizing what they want to do and that’s what we are going to externalize in the nation. That’s why I said we shall have a shadow government, because right now, what we have doesn’t make me happy”.

While insisting that she is not floating a new political party to seek elective office, Taiwo also said she is not acting as a front for her former husband, Chief Obasanjo.

“People might take me for a front for Daddy Obasanjo, no. I am not a voice for him, I am a voice for the Almighty God. I am a mother and when a mother sees her children, going through a lot of pains, she has to play her own part to ameliorate the suffering of her family”.

On President Muhammadu Buhari’s performance so far, she said the president is trying his best and should not be vilified for the current economic woes because according to her, he is “100 per cent good. He is clean, he has what you call undiluted honesty, he has what you call undiluted integrity and he isn’t cunning, he isn’t sly. He isn’t hypocritical”.

Taiwo, however, aligned herself with the observation by former presidential spokesman, Reuben Abati, that there are demonic forces within the precinct of the Aso Rock Presidential Villa, which have held the president hostage by “unleashing their venom” into him.

“Yes, Buhari may not be aware, they (demonic forces) work gradually”, she said. “But there are sadistic forces behind the throne, he isn’t even aware that they are sadistic and they are using their venom to poison the agenda given to him by God. He hasn’t come to inflict pain or hardship on the people, but right now, the change we are now experiencing in the nation is change into greater hardship, greater problem than we have ever seen before in the history of this country”.