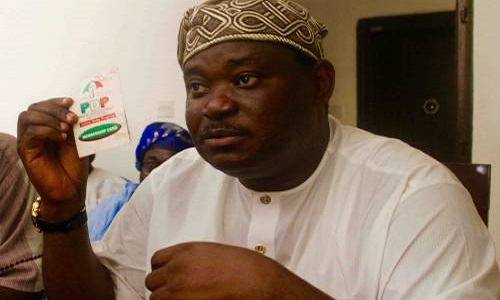 Barrister Jimoh Ibrahim has promised to invite Governor Ayodele Fayose to his inauguration as Governor of Ondo State, after he must have won the November 26 governorship election of the state.

The disputed governorship candidate of the Peoples Democratic Party was reacting to Fayose’s declaration that he (Ibrahim) will never become governor of Ondo State.

The Ekiti governor had while speaking on a weekly political programme on Orange FM, Akure, on Tuesday, described the emergence of Mr. Ibrahim as the PDP candidate in the forthcoming Ondo guber polls, as a fraud.

Reacting to the comment in a statement yesterday, Ibrahim told the Ekiti governor to exercise patience as he will soon know who the authentic candidate of the PDP in the forthcoming gubernatorial polls is.

He said it was too early for Fayose to panic.

The billionaire businessman also denied speculations in some quarters that the Ondo PDP crisis had degenerated.

He said: “Fayose is advised to wait till November 27 after the election, as we shall move to Ekiti to enforce the Justice Okon Abang judgment, which also covers the PDP executives in Ekiti State.

“Our movement to Ekiti will be during the day, so it is better for Fayose to prepare and learn from the experience of Governor Olusegun Mimiko, who was performing in Ondo, until he was distracted by Fayose”.

The PDP candidate urged Fayose to brace for the reality of the Ondo election, noting that he will triumph in the November 26 poll.

“Let me remind Fayose that I am not former Governor Kayode Fayemi and it is now payback time to treat Fayose the way he treated Fayemi.

“He is equally advised that, this is not an election of prophesy.

“Since Fayose has predicted that I will not be governor, it simply means he will be invited to attend my inauguration”, Ibrahim said.