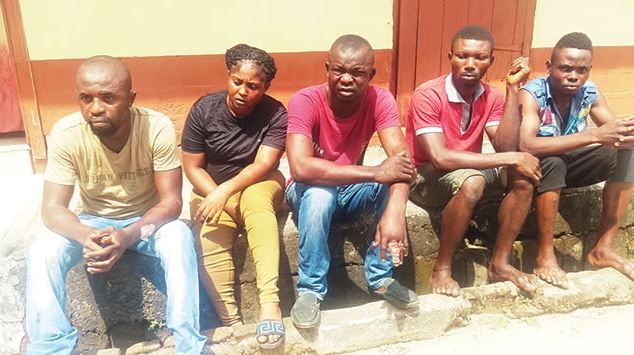 The Cross River State Police Command on Thursday paraded five robbery suspects who allegedly specialised in stealing money and other items from members of the public.

The command said three, out of the five paraded suspects, were rescued by the police from being lynched by angry mobs after they stole N250,000 from a victim along Parliamentary Road in Calabar.

The state Police Public Relations Officer, Irene Ugbo, at the command’s headquarters in Calabar, said the suspects were rescued after a distress call from concerned residents.

Ugbo said the police immediately rushed to the scene to rescue the suspects from being lynched.

She said the three suspects got into trouble after they robbed one Otamba Gabby of N250,000.

She explained that the suspects, Augustine Ani, John Okonkwo and Jennifer Abel, stood in front of the First Bank branch on Marian Road to monitor those who came out with large sums of money.

“However, he did not know that the occupants of the taxi were fraudsters. While in the taxi, he noticed that the money with him has been turned into pieces of papers that were neatly cut to the size of naira notes.

“He subsequently raised the alarm which attracted members of the public who got hold of them. They were about being lynched before the intervention of the police patrol team which rescued them. One blue Volkswagen with number plate, Abia ACH 564LU, and three bundles of papers cut to the size of naira notes were recovered.

“The suspects will soon be charged to court. The war against crime and criminality in the state is a continuous process that requires the collaborative efforts of all.”

Ugbo also said the two other suspects, identified as Nathaniel Ijabu and James Anika, were arrested on November 21 after they robbed an expatriate on Murtala Muhammed Highway in Calabar. She said the expatriate was robbed at the Bebobsco area of Calabar.

“On November 21, an expatriate in Calabar was attacked by a group of armed boys. The bad boys collected his Samsung G7 Galaxy phone, a wallet containing one dollar and Nokia phone. The suspects have confessed to the crime and investigation is still ongoing,” she said.