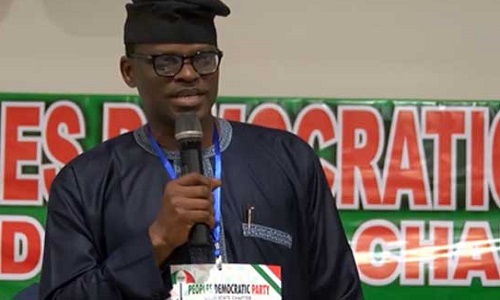 Mr. Eyitayo Jegede (SAN), the replaced governorship candidate of the Peoples Democratic Party (PDP) in Ondo State, has vowed that no amount of intimidation, blackmail or undue interference with the administration of justice, will stop him from contesting the November 26 governorship election in the state. ‎

Mr. Eyitayo, the immediate past Commissioner for Justice and Attorney General of Ondo, made the vow yesterday in a statement titled ‘The will of God and the Desire of the People Cannot be Subverted’, which he personally signed.

According to the replaced candidate, his purported replacement by the Independent National Electoral Commission, INEC, was evidence that “some anti-democratic elements were poised to subvert his mandate”.

Recall that INEC had in its final list of gubernatorial candidates for the Ondo election, which was released last week, published Barr. Jimoh Ibrahim’s name as candidate of the PDP.

Jegede said as a senior member of the legal profession, he was confident that justice would soon prevail.

“We are not unaware of the fact that the anti-democratic elements and their allies in the system have mapped out series of surreptitious tactics to subvert our mandate, and interfere with the course of administration of justice, with the latest of such being a baseless petition against the justices of the special panel set up by the President of the Court of Appeal, to blackmail them to washing off their hands from the case before them.

“No matter the act of blackmail… I have absolute confidence in the judiciary as the last hope and bastion of our democratic process”, he said.