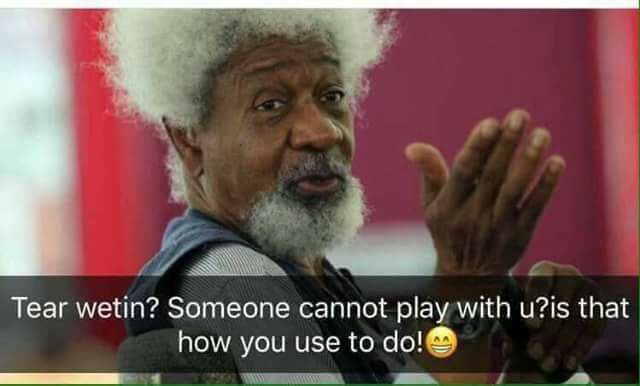 Mr Taiwo Kola-Ogunlade, the Google’s Communications and Public Affairs Manager, Anglophone West Africa, made the disclosure in a statement in Lagos.

“Google search in the just concluded week from Nov. 9 to Nov. 16, was filled with intrigues from internet users.

“People went online to learn more about Donald Trump, the newly-elected president of U.S., and Wole Soyinka’s response to the news of his winning the presidential election was also a burning issue.

“Also searched is TB Joshua’s rather ‘uncertain’ prophecy, and some other exciting stories,” he said.

Kola-Ogunlade said that the internet trolls decided to haunt Nigeria’s Nobel Laureate, Soyinka by bringing up his pledge to tear his green card if Donald Trump emerges as America’s president.

“Soyinka, who made the statement at Oxford University, was caught in crossfire by critics and agonists, who asked him to put his words into action.

“The Laureate responded to his accusers in a long article, schooling them on figures of speech and language use.

“This week on Google, Donald Trump shocked the whole world to emerge as the 45th president-elect of the U.S., to ‘trump’ Sen. Hillary Clinton,’’ he said.

The Google manager said that the moment the results of the polls was announced, folks went online to search for updates on Donald’s latest stance on issues he made before the elections, his age and even his net worth.

He said that the controversial Pastor, TB Joshua, founder of the Synagogue Church of All Nations (SCOAN), also became a ‘dramatis personae’ in the American elections when he predicted that ‘a woman’ would win.

“Tables turned on him when Donald Trump emerged as winner.

“Joshua came out to suggest his prophecy was misinterpreted, by referencing the final results where Clinton won ‘the vote of the majority of Americans,” Kola-Ogunlade said.

He said that the death of world-famous Canadian singer, Leonard Cohen, who died in his sleep following a fall in the middle of the night, at his home in Los Angeles, also got attention online.

“The 82-year-old Cohen was known for songs like “Hallelujah, Bird on the Wire, and Suzanne.

“His 14th album, `You Want It Darker’, was released last month,’’ Kola-Ogunlade said.

Other issues that got the attention of internet users are the announcement of the one-week warning strike by Academic Staff Union of Universities (ASUU).

The former National Security Adviser, NSA, retired Colonel Mohammed Sambo Dasuki, who did not attend his father’s burial was also a topic of discussion.

Other searches which topped Google search include Jumia’s Black Friday promotional deals to buyers for the 12 days began last week, the Nigeria vs Algeria World Cup Qualifiers with Nigeria winning 3 – 1.

Google Trends was launched in May, 2006, to allow people to see popular issues in terms of searches, trending on Google over a period of time