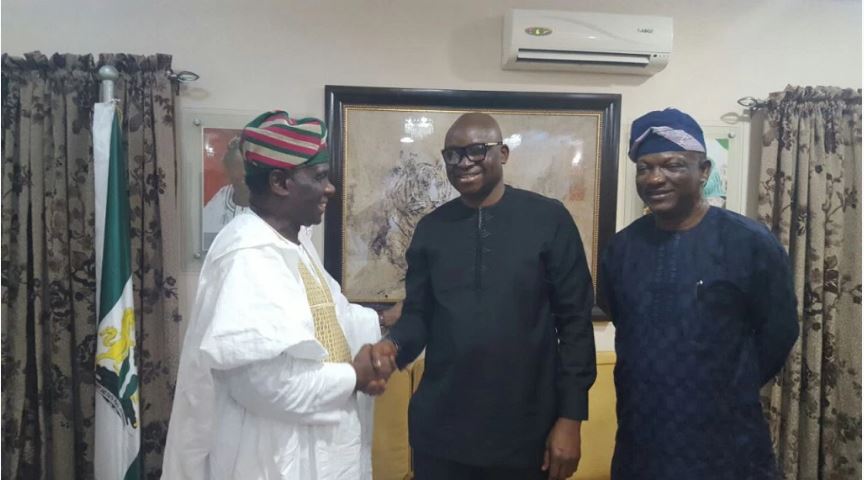 The Ekiti State Governor and Chairman, Peoples Democratic Party, PDP, Governors’ Forum, Ayodele Fayose, has called for support for all-inclusive efforts to rebuild the PDP, describing the party as “a sleeping, and not a dead lion.”

Governor Fayose, who emerged as Chairman of the PDP Governors’ Forum last Thursday, made this call when he visited former governor of Ogun State, Gbenga Daniel, in his Lagos residence on Sunday night.

According to a statement issued by his Special Assistant on Public Communications and New Media, Lere Olayinka, the governor, who promised to work with all PDP leaders across the country to make a success of his tenure, said that the party could still boast of the best and established structure across the country, which needs only reactivation by putting all hands on deck.

Earlier, Governor Fayose had received former Minister of Information, Jerry Gana and former governorship candidate of the PDP in Lagos State, Jimi Agbaje, who visited the governor at his Lagos residence to congratulate him.

While describing the present challenges being faced by the PDP as “a phase that we can overcome most importantly that the All Progressives Congress (APC) government has failed to impress Nigerians and succeeded in pauperising the nation by its cluelessness,” Governor
Fayose said; “falling is not unusual, but remaining in the falling state is admittance of perpetual defeat, which the PDP must not submit itself to.”

He lamented that Nigeria was being led by a nepotistic and dictatorial president, who has made the country to be more divided more than ever before, adding that “With the unleashing of hunger and suffering on Nigerians, PDP stands to gain electorally ahead of 2019 if the party put its house in order.”

The governor, who called on all serving and former governors as well as other leaders of the PDP to rise to the rescue of the party by providing fearless and sincere leadership for party faithful, described the continuous closure of the party’s national secretariat as part of the deliberate efforts of the APC led federal government and its agents like the police and SSS to make Nigeria a one party state.

Responding, former Governor Gbenga Daniel likened Mr. Fayose to the biblical Daniel, who believed in the rebuilding of the Macedonian wall.

Mr. Daniel, who called for support for Mr. Fayose to achieve his good intentions for the PDP, described him as “as a fearless, focused and courageous man, and a timely interventionist with a realizable mission.”