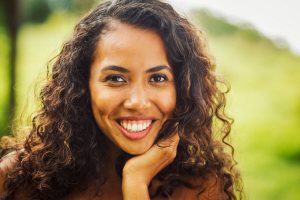 So rather then spend yet another night staring at your phone, get back out there and work it like a girl who’s not going to take any sh*t. Here are the three things you’ve got to do, if you’re going to play it cool like the most attractive women do:

1. Be a little distant

For some reason, it’s been engraved in our brains that guys are just too dumb to realize we like them, and it’s up to us to let them know. I’m sorry, but … what? We’ve made male romantic laziness a norm, and it needs to stop. Instead of going after the guy, let him come to you.

Make him work for your attention because you deserve someone who’s willing to put in some effort. And if that effort doesn’t start in the beginning, then (newsflash!) it never will. Women who play hard to get never act too interested. They never spend too much time chatting with a guy right after meeting him, and definitely no kissing on the first date.

If you worried that making him work might chase him off, then let him go. He wasn’t worth your time anyway.

2. Be a little skeptical

This goes for the safety of your heart AND your physical wellbeing. Don’t take everything he says as truth. Unfortunately, people lie all the time, and you don’t always know what you’re getting yourself into. Ask questions, do some digging, and figure out if the person you’re into is really who they say they are.

Until you’re comfortable enough to get that close with someone, keep him at a distance. Don’t tell them where you live or give out your cell number.
However you do it, keep control of guys’ access to you, and make sure he’s on the up-and-up.

After reigning in your male suitor, you might be tempted to fall into the comfort zone of 24-hour texting and getting as far up each other’s butts as (metaphorically) possible. But I’m going to challenge you to STOP. Your time is precious, and it shouldn’t be wasted on some guy you’re not even going to remember in twenty years. Make him prove that he’s deserving of your time by subtlety letting him know that you don’t have a lot it to spare.

So let his calls go to voicemail and wait a day to text back. If that’s enough to scare him off, then good riddance.

Trust me, you’re worth the effort to get to know.