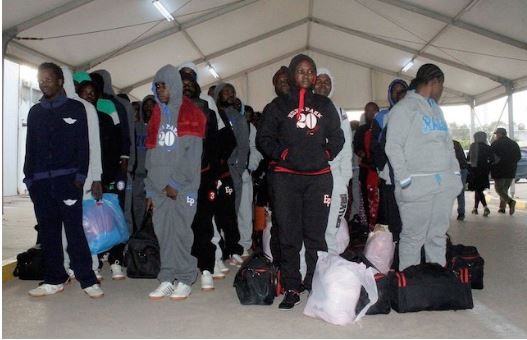 The deportees arrived at the Murtala Muhammed International Airport (MMIA), Lagos at about 8.40 p.m via a chartered Hifly aircraft with registration number CS-TQW, amidst tight security.

The Director-General, National Emergency Management Agency (NEMA), Alhaji Muhammad Sani Sidi, who was represented by Dr Onimode Bandele, the Deputy Director, Search and Rescue, NEMA was on hand to receive the deportees.

According to the NEMA DG, 33 of the deportees were from Italy, while seven and another three were deported from Germany and Belgium respectively.

“They were deported for committing various offences in their host countries and as you can see, our agencies are here to do the needful.

“As a responsible government, we cannot just leave our citizens to enter the country without giving them a good welcome and assisting them to get back to their families,” he said.

Sidi advised Nigerians to stay in the country and develop it together.

He said some stipends would be given to the deportees to facilitate their transportation to their various destinations.