AbiaPoly: Unraveling The Monsters Behind The Conundrum 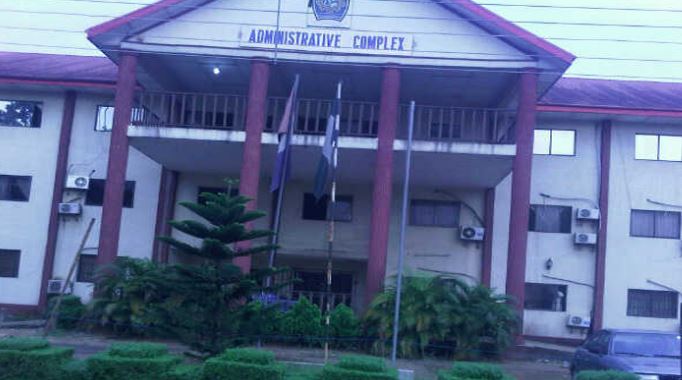 Things will certainly not be the same again at Abia State Polytechnic (AbiaPoly) Aba. The unraveling of the conundrum there has started in earnest.
For those who have been using AbiaPoly as cheap political launch pad under the guise of unionism, sorry, your time is up, and your game is up in smoke.
It is poignant to note that we have those who know the in and out of tertiary education in charge now in Abia State. Governor Okezie Ikpeazu is a professional teacher who left the academia as Head of Department of Biochemistry of Enugu State University. He has taught at various tertiary institutions in Nigeria, including the Ebonyi State University College of Basic Medical Sciences, University of Maiduguri, and Calabar Polytechnic where he taught from 1990 to 1992 during his Ph.D programme at the University of Calabar.
The commissioner for education, Professor Ikechi Mgboji, is not just a professor of law, but also taught in Canada for many years.
What are the issues in AbiaPoly?
Or better still, what constitutes the conundrum that has defied solution before now at Abiapoly?
The management, teachers and workers of the school are apparently conniving to punish the students, and each time questions are asked they resort to politics of unionism, going from one strike to another to demand for payment they’ve already collected.
It is an undeniable fact, though unknown to most members of the public, that Abia State Government does not pay teachers and workers of the school, but the state gives monthly subventions to the institution to augment its revenues which are not remitted to the state.
Abiapoly is allowed to collect revenue, including school fees, and use same to pay salaries of workers and maintain the school. The subvention from the government, which currently stands at N90m monthly, is meant to bridge the calculated shortfall between what the institution reports as monthly earnings and the money required to pay workers salaries.
Before the inauguration of the Ikpeazu administration, AbiaPoly had a debt profile of N2b owed principally to First Bank. As soon as governor Ikpeazu resumed, the state wrote off the N2billion First Bank debt. Available records indicated that the N2billion debt was an aggregation of overdrafts taken by the institution for which they were paying high commercial interest rates to the bank.
It should be noted that at the time the representatives of the institution told the governor that if the loan is settled they will be able to cut costs and run their operations even without requiring monthly subventions. If the Government had opted to use N2Bn to pay the monthly subventions it would have amounted to at least 22 months subventions. Note carefully that the Ikpeazu administration is just about 19 months old in office.
In addition to the N2Bn, AbiaPoly has in the past 19 months received additional N825m from the administration of governor Ikpeazu, as bailout and subventions from the state. All aimed at making sure that workers salaries are paid.
In November 2015, the school got N240m bailout. Subvention received from December 2015 to December 2016 amounted to N405m. Last week the school received another N180m subvention from the Paris Club refund inflow. Making a total of N825m in 19 months.
At the same time the school is receiving school fees from students.
According to the school’s website, AbiaPoly has a student population of about 15, 210.
In the 2015/2016 academic year, AbiaPoly collected about N1Bn as schools fees from 14,718 students that used the newly implemented online school portal for school fees payment.
In the current academic year, they’ve collected N140m before the school went on Christmas break, from 922 students. This confirms that the school has collected about N1.8Bn from students since 2015.
None of that money was remitted to the government as they were not required to do so.
So, the management of Abiapoly in 19 months have received about N4Bn from bailout, subventions from government and fees collected from students.
The big question remains; why is AbiaPoly still owing workers salaries?
The State’s commissioner for Finance, Mr. Obinna Oriaku, raised some pertinent posers when he was recently confronted by a concerned Abian during a live phone in radio program on why the school is still on strike.
His words: “You have asked about Abiapoly resumption and I feel we owe you an answer. Last week Abiapoly got two months from the Paris refund allocation committee which I am heading. This two months subvention amounted to N180m since our subvention is N90m per month. We expect they should call off the strike next week but Abiapoly problem goes beyond the two months paid.
“The school’s monthly wage bill is about N180m which is very high and unacceptable by any standard. Beyond that is the fact that on assumption of office of this government we bought off a loan of N2Bn from this institution to free them from the debt and ensure they run freely and be able to pay the workers since what we give them as subvention is not necessarily paying their monthly salary just unlike other higher institutions in the state.
“Abiapoly have 50 workers in their library unit that has what can’t pass as a private law library. They have 40 workers in their medical unit. Among these 40, you have four doctors and 6 matrons earning fantastic salaries. Is Abia Poly now a hospital?
“Canteen workers are among those being paid. I’m sure we all went to high institutions. During your days were those in the canteen not outsiders serving the students? In Abiapoly we have people washing plates in a canteen who will end up being paid pensions. Obviously the same Abiapoly workers are the problem with the school.”