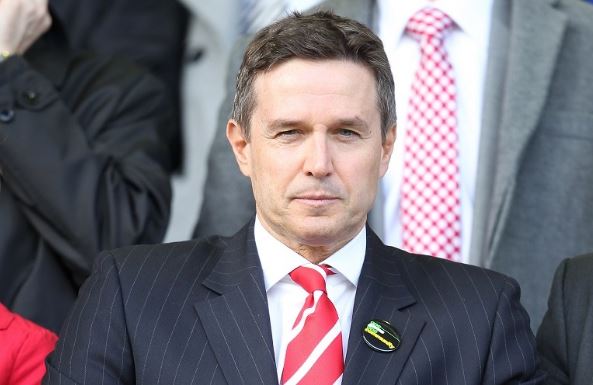 Chelsea have confirmed managing director Christian Purslow will leave the club at the end of the season.

Purslow, who previously held a similar role with Liverpool, has been at Stamford Bridge for the last two seasons and overseen a number of major commercial deals.

During his time at the club, Chelsea have secured a £60m-a-year kit deal with Nike and a £40m-a-year shirt sponsorship deal with Japan’s Yokohama Rubber.

Chelsea Chairman Bruce Buck said: ‘Christian Purslow joined us in 2014‎ with the goal of transforming our commercial activities.

‘Under his leadership some of the world’s finest brands and companies have joined us and we have announced some record-breaking sponsorships.

‘Christian will continue to work with the club in a transition period until the end of the season.

‘We are very grateful for his contribution and he will always be welcome at Stamford Bridge.’

Christian said: ‘I am proud of what we have all achieved, with Chelsea ‎now enjoying great success off the field as well as on it and a commercial team in place to help cement Chelsea’s position at the top of the game.’

Share
Facebook
Twitter
WhatsApp
Previous articleIf Buhari Can Receive Visitors, Why Can’t He Address Nigerians – Niger Delta Group Blasts Presidency
Next articleReleased! Here Are The 9 Golden Tips That Made Aliko Dangote The Successful Billionaire That He Is
- Advertisement -