Home News Feed Drama As ‘Arsenal Fan’ Slumps, Dies While Jogging in Lagos
Facebook
Twitter
WhatsApp
A young man who was only just trying to walk out, has ended up suffering a really tragic misfortune in the process. 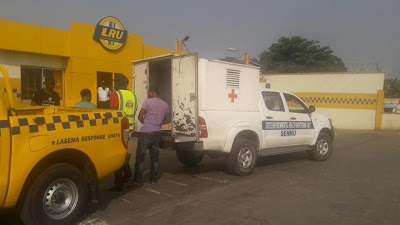 A man who is yet to be identified has died while jogging in Lagos.
The man who is said to be an Arsenal FC fan and who, reportedly slumped, yesterday morning, while jogging at Ilupeju By-pass area was confirmed dead at the Lagos State University Teaching Hospital, LASUTH, where he was rushed to by the response unit of Lagos State Emergency Management Agency, LASEMA.
According to Vanguard, it was gathered from police officers at the scene of the incident that the man, believed to be in his 20s, was wearing Arsenal FC branded jersey, with no other form of identification on him.
Vanguard gathered that LASEMA’s Emergency Response Team, alongside paramedics, immediately attended to the victim, moved him in its ambulance to LASUTH, where he was confirmed dead.
His body has since been moved by the State Environmental Health Monitoring Unit, SEHMU to the Mainland Hospital mortuary.
The General Manager of LASEMA, Mr. Adesina Tiamiyu, advised that any person with relevant information on a missing person said to be on early morning jogging exercise around Mushin/Ilupeju/Fatai Atere/Coker Road/Palm Avenue junction axis, should contact the Police Public Relations Officer or Olosan Police Station.
He, however, advised that individuals should carry out routine medical check-up to ascertain their fitness before embarking on early morning jogging or any other exercise to avoid such unfortunate incident.