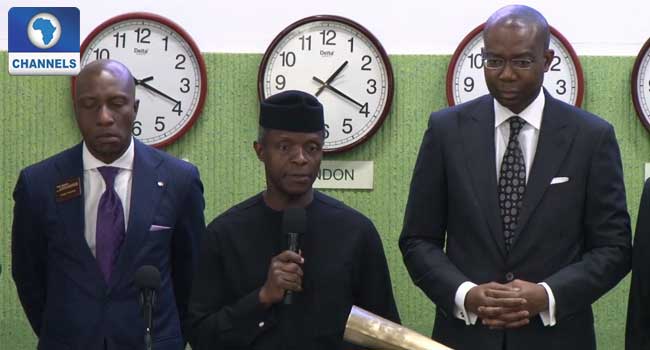 The Federal Government has expressed its readiness to become the first country in Africa to float sovereign green bonds in order to address climate change and environmental projects.

Acting President, Prof Yemi Osinbajo disclosed this on Thursday at the Green Bonds Capital Market & Investors Conference organised by the Federal Ministry of Environment and the Debt Management Office (DMO) at the Nigerian Stock Exchange (NSE) office in Lagos.

According to Prof Osinbajo, the Federal Government under the Green Bonds initiative would give N20 billion under the first tranche before the end of the first quarter through the nation’s bourse.

The move he said is aimed at addressing some of the country’s most challenging issues of energy and the environment.

The acting President added that the initiative would also provide an opportunity to deepen the capital market as well as tackle poverty.

The bond issuance, he explained further will support the Federal Government’s shift to non-oil base assets for project financing for economic growth and development.

Professor Osinbajo said the government would flag off the climate change bond investment vehicle, which he believes would open the way for other private sector issuers in Nigeria.