Senate President Bukola Saraki has denied every information about him importing any bullet proof car, contrary to the report laid before the Senate.

The Senate said this when he appeared before the Senate Committee on Ethics, Privileges and Public Petitions in Abuja on today (Monday).

He said he had nothing to do with the vehicle under reference, adding that the allegation was an attempt to dent his reputation. 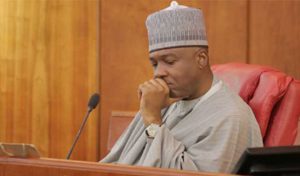 “I am not (an) importer and at no point did I import an SUV Range Rover. As you know, this is a vehicle that is not a personal vehicle.

“It is a vehicle which was processed through the National Assembly.

“I don’t know anything about the importation; I did not appoint any clearing agent or anything like that.

“Most of the vehicles that are here, you only know when they are delivered to you. None of these did I import, nor did I get any agent or went to the port.

“This is because we all know that all treated vehicles have end-user certificate and there it states clearly who the importer is and these documents are available and there is no document anywhere that shows my name.

“So, I want to state categorically that this is not true and it is important that I come here and clear my name and put this matter to rest.

“We all raised the issue of the policy that is anti-people in the interest of Nigerians.

“This policy that really have no value at all and that was why this motion came up and we debated it in the interest of Nigerians.

“Unfortunately, those who want to fight back went and thought there was something to blackmail us with.

“I know the documents you have will show clearly that it has nothing to do with me,” Saraki said.

The Senate President commended the committee for giving him a fair hearing.