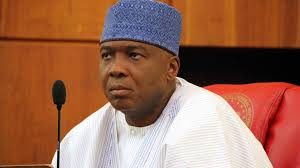 The Senate President of Nigeria, , Dr Bukola Saraki is yet to be left off the hook by the Judiciary as his trial continues ,over alleged false assets declaration, with the cross examination of prosecution witness, Mr Samuel Madujemu.

The witness told the tribunal that he is not in possession of the report of investigation conducted on the senate president’s asset declaration. Under cross examination, the defence counsel, Kanu Agabi, asked if he was a member of the team in 2006 when a team was set up to investigate Saraki’s claim.

When asked why he swore an affidavit affirming knowledge of the investigation, Mr Madujemu said that the earlier report as told to him by the EFCC, was scanty.

Also, when asked if he had any record by the EFCC declaring the report scanty, he said that he had a mental record because he had only been informed orally by the EFCC members of the team.

The witness was also asked why he did not invite the Senate President as part of his investigation and in response, he said the statements on the senate president’s asset form were enough for the investigation.

He further stated that besides that, it was the prerogative of the chairman of the Code of Conduct Bureau to invite a public servant for interview, even though it was the convention at the bureau.