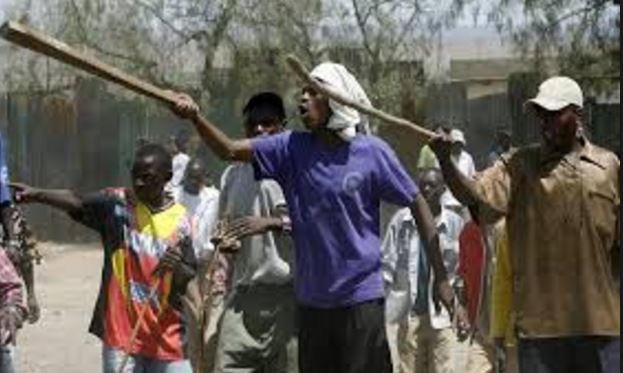 No fewer than 10 people including children were feared killed in a clash between the Yoruba and Hausa communities in Ile-Ife.

Our correspondent observed that many people who sustained varying degrees of injury were receiving treatment at various hospitals in the town, as commercial activities were totally paralysed in the cradle of Yoruba race.

Many houses were razed while miscreants took advantage of the clash to loot and vent their anger on their adversaries.

It was gathered that a Hausa man allegedly committed adultery with a Yoruba housewife and attempt to find out the truth snowballed to physics assault that degenerated to free for all crisis.

It was further gathered that weapons of varying types such as guns, daggers, clubs, bow and arrows were freely used.

Eyewitness account revealed to our correspondent that, the people organised themselves into two formidable groups to march themselves strength for strength in the frightening battle which has already led to the killing, maiming, and waylaying of innocent souls in the kingdom.

When our correspondent visited the battle ground around 12.30 pm, the Ife warriors were seen on the street, threatening not to retreat as they alleged conspiracy saying, some police men dispatched to maintain law and order were on the side of the Hausas before, the police team was led by a Hausa man.

Two of the ten people killed in the mayhem were burnt while born fires were also made by both warriors who are still being consoled to give peace a chance.

In the ensuing crisis, combine teams of anti riot regular and mobile police men were fully on ground to maintain peace and orderliness as they were strategically located to quell the crisis.

In his own comment, the acting police commissioner in the state, Mr. Mohammed Abubakar Koji while speaking through the command police public relations officer, Mrs. Folasade Odoro, said that, the police men are in control of the situation.

Meanwhile, Ooni of Ife, Oba Adeyeye Ogunwusi has appealed to the warring factions to give peace a chance saying there is no gain in crisis.

Speaking through his media aide, Comrade Moses Olafare, the monarch said that, he had instructed some palace men to see to the rescue of the Hausas who were captured by the Ifes in the mayhem.

Olafare who gave assurance that peace will soon return to the ancient town said the monarch has waded in fully.

Meanwhile, the Government of Osun has declared a two day curfew in entire Ile-Ife City, State of Osun.

“This has been compelled by the breach of the peace in the area which has led to avoidable destruction of lives and properties.

The curfew, which will be between 6pm to 7am, will be in force till Friday. The curfew takes effect from today Wednesday March, 8th, 2017,” Osun state government said.