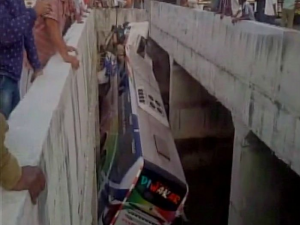 Police say no fewer than 44 people were killed when a passenger bus fell into a river in India’s northern mountainous state of Himachal Pradesh on Wednesday.

The bus rolled off the road and fell 500 metres into the Tons river in the Nerwa region, local police officer Narender Singh said.

“Forty-four people including at least 10 women and children died in the bus crash that occurred around noon,” Singh said from the site of the accident.

Police and local agencies reached the scene and were carrying out rescue operations.

Officials said the death toll was likely to go up as bodies were still being extricated from the river.

Local media reported that there were a total of 56 passengers in the bus headed to the neighbouring state of Uttarakhand.

India has the highest number of traffic fatalities in the world. An average of 135,000 people die on the country’s roads each year, according to government data.