Nigerians have been assured by the defence Headquarters that there is no “resurgence of insurgency’’ in the North-east, particularly in Borno State despite recent attacks and suicide bombings in the state. 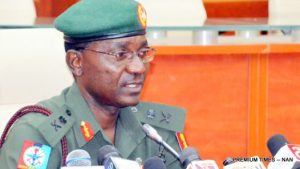 The assurance was given on Friday by the Director Defence Information, John Enenche, at the monthly update on security situation nationwide.

Mr. Enenche, a major general, said that the military, particularly the Nigerian Army had re-strategised to deal with those attacks.

“The general public has a feeling which I have been made to understand that there seems to be like there is resurgence of the Boko haram activities in the North-east, particularly in Borno State.

“I stand here this morning to tell you categorically that it is not true.

“Let me also remind you that the Boko Haram groups, I called them groups because it is not one. They vary in their characteristics and behaviour.

“They are not professional, they do not know what we armed forces of Nigeria, know,’’ he said.

According to Mr. Enenche, the new tactics being adopted by the military is to enable the troops to clear remnants of the insurgents.