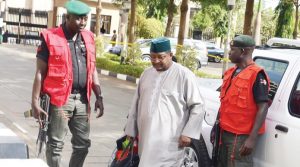 ,has gotten his request to travel for three weeks based on medical treatment granted by a Federal High Court in Abuja.

The prosecuting counsel, Mr Ben Ikani,did not oppose the application by the former  but he urged the court to release the passport to the defendant’s lawyer, Mr Ahmed Raji (SAN).

In his ruling on the application, the trial judge, Justice Ahmed Mohammed, adopted the suggestion by Ikani and also ordered that the defendant’s surety must depose to an affidavit of liability if the ex-NNPC GMD failed to return to Nigeria to attend his trial.

The Economic and Financial Crimes Commission is prosecuting Yakubu on six counts bordering on fraud and false declaration of assets filed against him on March 10, 2017.

Operatives of the EFCC had recovered the sum of $9.7m and £74,000 stashed in a huge fireproof safe in a house belonging to Yakubu in a slum in Kaduna.

The sums of the foreign currencies, which were the subject of the charges instituted against Yakubu, amounted to about N3bn.

Abubakar, a Deputy Superintendent of Police attached to the EFCC, said he was part of a team of investigators that recovered a safe containing the money in a house in Sabo-Tasha, Kaduna, allegedly owned by Yakubu.

The witness was to be cross-examined by the defence on Wednesday.

But after Yakubu’s lawyer, Raji, moved his client’s application seeking permission to travel abroad on Wednesday, the trial could not proceed to cross-examination due to time constraint.

Raji informed the judge that his client’s application was filed on May 22.

The application was not opposed by EFCC’s lawyer who only suggested that Yakubu’s passport should be released to the defendant’s counsel.

In his ruling, the judge held, “The defendant’s application filed on May 22, 2017 seeking leave to travel to the United Kingdom for the continuation of his medical treatment is hereby granted.”