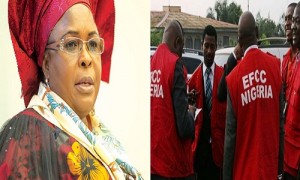 The Economic and Financial Crimes Commission (EFCC) filed against the former first lady o Nigeria,Dame Patience Jonathan, has been   adjourned to May 22, by a  Federal High Court sitting in Lagos on Monday, EFCC are seeking final forfeiture to the Federal Government, of the sum of 5.8m dollars belonging to former First Lady.

Justice Mojisola Olatoregun granted the adjournment following an argument by counsel to Jonathan, Mr Ifedayo Adedipe (SAN), that the respondent was not given sufficient notice to file a response.

The court had on April 26, issued an interim order for forfeiture of the sum of 5.8m dollars belonging to Jonathan to the Federal Government.

The order followed an ex parte application by the Economic and Financial Crimes Commission (EFCC), seeking a forfeiture of the sum to government, pending the determination of the motion on notice.

The court had granted the interim order and had further directed that same be advertised in a national daily, to enable any interested party to appear and show cause why the interim order should not be made final.

When the case was called on Monday, counsel to the respondent, Adedipe informed the court of a notice of Appeal he had filed against the court’s ruling, as well as a motion for stay of further proceedings.

He argued that the EFCC ought to have waited to abide by the decision of the court of appeal in respect of the matter.

Adedipe also noted that the publication of the court’s order in the national daily was only done on May 11, adding that such notice was too short to allow for the filing of any response.

Responding, lawyer to the EFCC, Mr Rotimi Oyedepo, stressed that the business of the day was for any interested party to appear and show cause.

He noted that the argument of the respondent’s counsel fell outside the purview of the court’s business with respect to the matter at hand, and urged that progress be made.

In her observation, however, justice Olatoregun noted that the suit will only be adjourned on the ground that the time frame of the said publication was short.

She, therefore, adjourned the case to May 22, for the respondent or any interested party to appear and show cause why the interim forfeiture order should not be made absolute.

NAN also reports that Justice Olatoregun had sometime in November, 2016, granted a forfeiture order of the said sum following an application by the Commission.

The court, had however, in March this year vacated the earlier order, following an application by Jonathan’s counsel, Adedipe, who had challenged the propriety of the EFCC’s action.

The EFCC had then filed a new motion seeking an order for interim forfeiture of the said 5.8m dollars lodged in the respondent’s Skye Bank account.

The Commission also sought an order directing the interim forfeiture of N2.4b discovered in an EcoBank account in the name of La Wari Furniture and Bath Ltd, suspected to be proceeds of crime.

It further sought for the publication in any national newspaper, of the said order, to enable any interested party to appear and show why the interim order should not be made final.

The commission averred in an affidavit that it received an intelligence report that funds suspected to be proceeds of crime were warehoused in a Skye Bank account belonging to Jonathan.

It said that the report was analysed and found worthy of investigation, adding that the ex- First Lady opened the account on Feb. 7, 2013.

According to the Commission, several cash deposits were made by the ex- First Lady in the United States Dollars, through Waripamo Dudafa, a former aide to ex- President Goodluck Jonathan.

The commission averred that another frequent depositor of funds into the said account was one Festus Iyoha, a steward in the State House, Abuja.

According to the Commission, Jonathan had dissipated the funds, leaving a balance of about $5.7m.

The Commission further averred that if the fund was not forfeited in the interim, it may be fully dissipated by Jonathan.

It added that N2.03b, suspected proceeds of crime, was currently on fixed deposit in the account of La Wari Furniture, in addition to a credit balance of about N389m.

The Commission therefore urged the court to grant the application in the interest of justice.

Granting the order, Justice Olatoregun adjourned the case till May 15, to enable any interested party to appear and show reason why the interim order should not be made final.

Fani-Kayode, Church Of Satan Drag Each Other On Twitter

Former minister of aviation, Femi Fani-Kayode and the Church of Satan dragged each other over report of a pregnant woman who was killed by...
Read more