Home National News Find out what a kidnapper did with a ransom of N12million...
Facebook
Twitter
WhatsApp 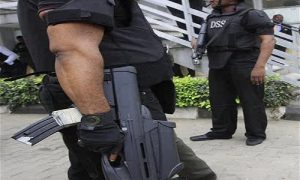 A kidnapper has been arraigned by the Department of State Service ( DSS)  at a Lokoja High Court for the kidnap of a victim who was forced to pay N12m as ransom.

The court heard how the suspect, Momodu Onuku, paid debts and bought a Volkswagen Golf car from his N2.5m share of the ransom.

A witness in the suit, David Olanrewaju, a principal legal officer with the DSS told the court presided over by Justice Sunday Otu that the accused confessed to him that his gang kidnapped Alhaji Adamu Makama and collected the sum of N12m as ransom from one Haruna Salihu.

When hearing in the case resumed on Thursday, Olanrewaju in his examination-in-chief gave a detail of how Onuku was arrested and the confessional statement he made.

He said, “On February 17, we got information from our local government formation in Ankpa that one Mallam Adamu Makama, a businessman residing at Opulega was kidnapped by unknown gunmen eight in number.”

According to him, Onuku’s Nokia 105 was used by the kidnappers for ransom negotiation, adding that the suspect was located with the aid of GPRS.

“The accused’s phone, a Nokia 105, was used during negotiation with the victim’s wife and one other person, Haruna Salifu. We later forwarded the numbers to our communication intelligence unit for geo-location of the owner and this led to the arrest of the accused in Dutse Alhaji area of Abuja on February 23,” he said.

Olanrewaju added that N203,540 was found on the accused when he was arrested.

However, counsel to the accused person, Glory Zekeri, objected to the admissibility of the statement as an exhibit before the court, claiming that her client was beaten and tortured before the statement was taken.

She said the accused person had stated that the statement was not voluntarily taken from him as he was beaten and intimidated before giving the statement under duress.

But under cross-examination, Olarewaju said the defendant gave the statement under a conducive atmosphere, denying any form of torture as the system abhorred torturing and intimidation of suspects.

He said the accused had commended the effectiveness of DSS in tracing him to his house barely after 10 minutes of his arrival for the arrest through the geo-location of his phone.

The presiding judge however adjourned the case to June 13, to enable prosecution close his case and the defendant open his defence.