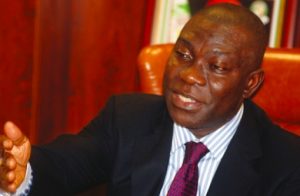 The Deputy Senate President, Ike Ekweremadu, has advised that the sit-at-home order declared by IPOB and MASSOB  in South-East for May 30 should be optional.

The Indigenous Peoples of Biafra and the Movement for the Actualization of the Sovereign State of Biafra had called on citizens of South-East to stay at home on May 30 to observe their anniversary.

He  gave the advice on Sunday at an Inter-denominational church service at the Presbyterian Church of Nigeria, Abakaliki, to commemorate 2017 Democracy Day and Gov. David Umahi’s second year in office.

He noted that while the agitation and concerns of the groups are genuine, they should not be pursued with force or other forms of armed struggle.

“Individuals who operate private businesses and want to stay-at-home on that day should stay, while those who want to operate their businesses should be allowed to do so.

“I believe that civil and public workers should be ready to go to work on that day as I appeal that no group should force people to stay at home against their wishes,” he added.

The deputy senate president called on the agitators to embrace dialogue and constructive engagement in pursuing their agitation; not coercion or other forms of armed struggle.

“The struggles and concerns are genuine but with the collaboration of all and constructive engagement, we will surely get to our destination no matter how long it takes.

“Black Americans agitated for a long time before Barack Obama became president in 2008, likewise in India, it took constructive engagement for the people to actualise their agitation.

“South Africa despite racial disturbances and black oppression, employed constructive engagement and intervention of the western world and African interests such as Nigeria’s, to dismantle apartheid,” he said.

Ekweremadu congratulated the people of Ebonyi on the second year in office of their governor.

He noted that the state had matured politically and socially, adding that any indigene could aspire for any political office in the state.

In his remark, Umahi noted that no individual or group would force the citizens of the state to stay-at-home on May 30.

“I have met the leadership of these groups on various occasions and discovered that most of their agitations are correct but the ways they seek to actualise them can be faulted.

“I have also met the leadership of market unions in the state and we resolved that markets would be open on that day and no trader or any other individual will be molested,” he said.

The governor said that the case of Ebonyi was different as the state had suffered untold marginalisation right from its days in old Anambra, Imo, Enugu and Abia states.

“The deputy senate president is fighting marginalisation of the Igbos at the federal level; when this is addressed, we will start our own agitation of marginalisation as a state.

“Ebonyi does not believe in regional government because we will continue suffering deprivation but believe in the restructuring of the country to address all imbalances,” he said.

In his homily, Rev. Father Abraham Nwali urged political and economic leaders in the state to build industries instead of embarking on ‘non-direct-impact’ projects such as hotels.

“The governor should be supported in his desire to ensure that sachet water companies are constructed in the three senatorial zones of the state,’’ he said.

Prayers were said by officiating ministers of the Presbyterian Church for the unity of the country and peace in Ebonyi.