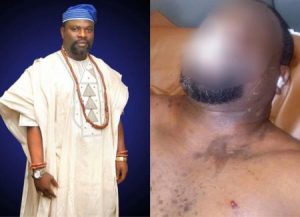 A popular chairman of Motorcycle Operators Association of Lagos State Chief Rasaq Bello, popularly known as Hamburger, has been shot dead in Oshodi.

Bello who was a member of the Lagos chapter of the National Union of Road Transport Workers (NURTW), was shot dead Monday during the councillorship primaries of the All Progressives Congress (APC) held at Shogunle-Oshodi.

He was allegedly shot by members of a rival gang led by Samson Agbetoye, popularly called Golden.

Golden belongs to the MC Olumo faction of the NURTW in the state, Inside Mainland learnt.

Speaking to Inside Mainland, a source said “Hamburger was seen as a threat to some kingpins within the NURTW in the state as the chairman of Motorcycle Operators Association Lagos State. His recent chieftaincy title as Akile of Ewuland and Akinrogun of Shogunle alongside his influence politically made him a target for election violence.”

Narrating the events that led to the death of Hamburger, the source disclosed that “earlier in the day, Hamburger was at home prior to the APC primary election to elect the flag-bearer for Shogunle Ward E. When the election started, he went to the venue at Shogunle Town Hall which is very close to his new house with some boys. While at the venue, some people engaged him verbally over the issue of Ariyo as returning Chairman and everything went peaceful until the election was cancelled and members were returning to their various homes.

“Suddenly, people noticed that there was a misunderstanding leading to fight among some supporters present. The elders including Hamburger all rushed there to settle the fight. On getting to the boys, the whole thing turned around. The boys were dragging with him.”

Speaking further, the source said “he was shot by one of the union guys who was not part of those fighting at the Ward. The shooting dispersed people and Hamburger was left on the ground for some minutes while others ran for safety. After a while, people came to rescue him to the hospital for treatment where he was later pronounced dead.”