Imo State by Governor Rochas Okoroch has been accused by the Indigenous People of Biafra ( IPOB)  on Saturday for sacking commissioners and local government chairmen in the 27 council areas of the state because of the sit-at-home order that they did observe to honour Biafra soldiers in the state. 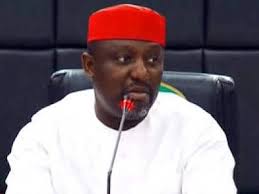 In a statement issued by IPOB’s Media and Publicity Secretary, Emma Powerful, the group said Okorocha instructed his commissioners and council chiefs not to allow the sit-at-home directive to work in the state.

IPOB stated that Okorocha’s objective was to please the Federal Government.

It stressed that the success of the sit-at-home order annoyed the governor, who ordered the sacking of the officials.

The statement read in part, “IPOB intelligence unit discovered that the APC, led by President Muhammadu Buhari, mandated Okorocha to do all he could to stop the sit-at-home order issued by our leader, Nnamdi Kanu. But to his surprise, he could not stop the remembrance of our fallen heroes.

“Okorocha mandated his commissioners and the transitional chairmen in all the 27 council areas of Imo State to go to the villages and communities to sensitise them to boycott the sit-at- home order at all cost. Unfortunately, those mandated to do so could not do it because power belongs to the masses, not those in government.

“The total compliance with the directive in Imo State, particularly in Owerri and other parts of South-East, surprised Okorocha and other APC members in the South-East and South-South.”

Meanwhile, the Deputy Governor of Imo State, Eze Madumere, has dismissed speculations that he has a disagreement with Governor Okorocha.

There have been concerns over inciting statements against the state government by political leaders from Owerri zone, where the deputy governor hails from.

It was gathered that the governor had allegedly suspected his deputy of being the brain behind the agitation for an indigene of the Owerri zone to become the governor of the state in 2019.

But in a statement issued by Madumere’s  Senior Special Assistant on Media, Uche Onwuchekwa, the deputy governor said  his relationship with the governor remained like that of a good son and his father.

The statement read, “The deputy governor’s loyalty and commitment to the administration have been tested and proven. Unlike what obtains in other states where governors and their deputies live like cat and rat, this is not so in Imo. Even as we speak, he is representing the governor at an international assignment.”