Deolu
Some very young children have been forced to shoot prisoners in a new ISIS video which portrayed the atrocity. 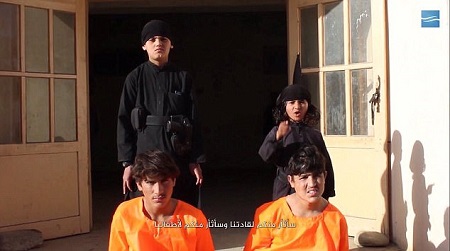 Brainwashed children brandishing handguns shoot prisoners in the back of the head in a brutal new ISIS execution video.
The two boys, both dressed in black, force their captives to kneel in front of them in front of the doorway of a building in Afghanistan.
Footage shows them aggressively pulling back the heads of the two terrified ‘spies’ before the younger of the two jihadists starts ranting at the camera. They then point their handguns at their prisoners and carry out the killings.
The children are so-called ‘cubs of the caliphate’ – the name given to youngsters who have been brainwashed with ISIS ideologies and trained to fight and kill for the terror group.
In another scene, three more men are murdered, this time by four heavily-armed adults standing in a clearing next to an ISIS flag.
It is not yet clear where exactly in Afghanistan the footage was captured. 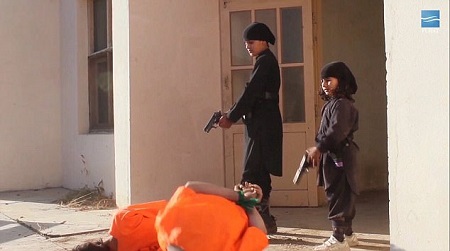 ISIS has released several videos, including one earlier this year, showing young children carrying out brutal executions of adults, training with weapons, and pledging allegiance to ISIS.
Last month it emerged that the head of ISIS in Afghanistan was killed in a raid carried out by Afghan and US special forces, the country’s president said.
Abdul Hasib died during an attack by 50 US special forces and 40 Afghan commandos overnight on April 27, President Ashraf Ghani said.
A statement by United States Forces – Afghanistan, said the raid also killed several other high-ranking members of the organisation along with 35 fighters.
Hasib took over as leader of ISIS-K, an ISIS affiliate in Afghanistan, last year after predecessor Hafiz Saeed Khan was killed by a US drone strike.
Hasib was responsible for directing the Kabul National Military Hospital attack on March 8 which killed more than 100 Afghan civilians, the statement said.
He was also responsible for beheading tribal elders in front of their families and kidnapping women and girls before forcing them to marry his fighters, according to the statement.
Watch the video below: