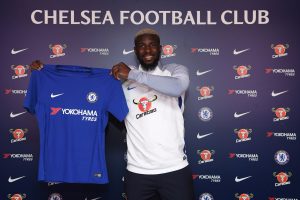 The 22-year-old France international has signed a five-year deal with the Premier League champions.

He becomes Chelsea’s second major summer signing after they brought in defender Antonio Rudiger from Roma.

Bakayoko joined Monaco from Ligue 1 rivals Rennes in 2014 and made his France debut in a friendly defeat by Spain in March this year.

He was part of the Monaco squad that reached the Champions League semi-finals last season, going out of the competition to Juventus.

Bakayoko, who will wear the number 14 shirt at Chelsea, said: “I am very happy to be here and to join this great team.

“I have grown up watching Chelsea. Signing was the natural thing for me because it is a club I loved very much in my childhood.

“I am now looking forward to evolving under this fantastic coach [Antonio Conte] and alongside so many great team-mates.”