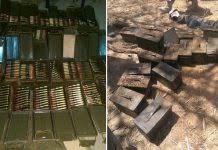 An illegal arms manufacturing factory in Delta State has been discovered by the Joint Task Force in the Niger Delta, Operation Delta Safe. The troops also  recovered assorted weapons, including 28 guns, cartridges and military equipment.

The JTF said the successful raid followed an intelligence report of an arms manufacturing gang in the Arhavwarien, Ughelli area of Delta State, which was supplying deadly ammunition to cultists, sea robbers, militants, armed robbers, among other criminals.

Briefing journalists at the headquarters of the command in Igbogene, Bayelsa State, on Monday afternoon, the Commander of OPDS, Rear Admiral Apochi Suleiman, said that 18 persons were arrested in connection with the various crimes committed in the region.

Suleiman, who jointly addressed the media along with the commanders of the land, sea, air and other components of the special security outfit, noted that the JTF conducted the raid on the arms’ factory following an intelligence report.

He stated that some of the intelligence officers of the command placed an order for a large batch of the weapons manufactured by some key suspects identified as Isiyaku Ochuko, Ese James and Elvis Philips.