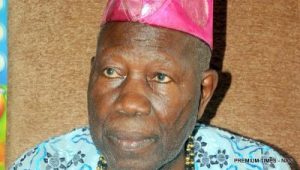 The Olubadan of Ibadanland, Oba Saliu Akanmu Adetunji, Aje Ogungunniso 1, has vowed not to attend the coronation of 32 new Obas scheduled for today by the state government.

In a statement signed by the Olubadan’s spokesperson, Adeola Oloko, Olubadan categorically stated that he has no hand whatsoever in the proposed coronation of new Obas by the Oyo State Government led by Governor Abiola Ajimobi. He said that he would not attend the coronation of the new obas slated for Sunday at Mapo Hall, Ibadan.

Though, the government has made him the father of the day, Oba Adetunji vowed not to attend the coronation.

According to a statement from Olubadan, “I have said it for the umpteenth time that I am opposed to the chieftaincy review and its recommendations as the process for such exercise has not been followed. Therefore, I cannot see how, as being advertised in some media houses I could possibly play a fatherly role in an exercise that I have not endorsed? Besides, as the father of Ibadan indigenes irrespective of political and ideological persuasions, I cannot attend an occasion where local government executives of one political party have been sending text messages to the party members in Ibadan land to mobilise for the event as if it is a political rally”.

He continued, “So, as the prescribed and appointing authority on Ibadan Chieftaincy matters, I consider, until otherwise reversed, that any conferment of crowns on anybody is an exercise in futility. More so, it is going to be contemptuous for anybody to attend that programme as there are two suits that are yet to be determined before the court. Also, where is the humanity of the organizers of this programme when Ibadanland is still mourning the passage of the Otun Balogun, High Chief Dr. Femi Olaifa, who was one of them until Thursday 24th August?”

However, Governor Abiola Ajimobi has prayed for renewed strength and continued peaceful reign for Olubadan, as the monarch celebrates his 89th birthday, on Saturday.

A statement by the Special Adviser, Communication and Strategy to the governor, Mr. Yomi Layinka, quoted the governor as having congratulated the monarch and the entire people of Ibadanland on the momentous occasion.

The governor said it was by divine arrangement and not sheer coincidence that Olubadan’s birthday was coming at a period Ibadanland was witnessing a major transformation and boost in royalty, which, he said, was poised to enhance the status of the ancient city.

As the monarch inches very close to assuming the nonagenarian status, the governor prayed that the Almighty should continue to strengthen him and imbue him with greater wisdom and knowledge for the benefit of the people of Ibadanland.

Ajimobi said, “Kabiyesi, on behalf of the good people of Oyo State I rejoice with you on the occasion of your birthday, which provides another opportunity for me to thank the Almighty for preserving your life and for renewing your vigour.

“I pray for a renewed strength for you and may God continue to preserve your life to witness more years and peaceful reign in Ibadanland. During your time, may Ibadan continue to witness rapid progress and development.

“As we savour this occasion, I call on the entire citizens of Ibadanland, members of the Olubadan-in-Council and friends of our dear state at home and in the Diaspora to join me in clinking of glasses to celebrate our dear father’s 89th birthday.”

The governor prayed that the Olubadan lived long enough to join the league of centenarians, just like his immediate predecessor, late Oba Samuel Odulana, so that the people of the state would continue to draw from his fountain of knowledge.