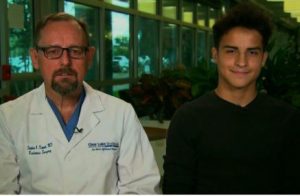 It was a heroic performance for Dr. Stephen Kimmel, a general pediatric surgeon at Clear Lake Regional Medical Center in Webster, Texas,as the doctor  rushed out of his home when he received a call about Jacob Terrazas, who faced permanent damage if the surgery wasn’t performed immediately.

Despite the fact that his own home was flooding because of Hurricane Harvey, a Houston area doctor was determined to perform emergency surgery on the 16-year-old boy that he used whatever means necessary to reach the hospital.

Dr Kimmel said he headed out in his car, but had to turn back because of the flooding, ‘so we ran through the flooded streets and it was pretty windy and rainy. We went by canoe and then by (a firefighter’s) pickup truck and by canoe again. And I felt that these guys knew what they were doing, so I didn’t worry about myself at all the whole time” he said.

He continued to say, ‘somebody had to take care of this young man, and so I thought, well if I can do it, I certainly should. He was on the way to our institution and I’m glad I was able to make it’.