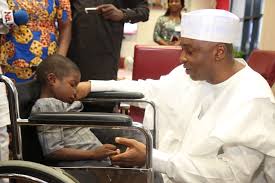 A six-year-old identified as Ali Ahmadu who was a victim of Boko Haram’s violence in Chibok, Borno State,who met with the Senate President, Bukola Saraki, for assistance, has been flown to Dubai, United Arab Emirates, for a corrective surgery.

Ahmadu, whose donations for surgery were collated by two organisations, the Global Initiative for Peace, Love and Care and the Dickens Sanomi Foundation, left on Sunday for the medical treatment.

The teenager was said to have beeen injured by a motorcycle rode by the Boko Haram terrorists, who raided the Chibok community at night about three years ago.

It was said that although his spinal cord was not badly affected, he has not been able to walk.

The boy was brought by the organisations to Saraki on July 27, and the Senate President assured them that he would mobilise friends and senators to assist the six-year-old.

Speaking to journalists at the Nnamdi Azikiwe International Airport, Abuja, before boarding an aircraft with the victim, the GIPLC Coordinator, Nuhu Kwajafa, said the foundation had raised $65,000 for the trip.

He noted that the amount would cover transportation, feeding and medical bills.

He said, “Ali needs a corrective surgery to enable him to walk again after being run over by a motorcycle belonging to the Boko Haram terrorists during a night raid in Chibok.

“After the incident, he was bleeding and abandoned under a mango tree for three days. Nobody went for him because the Boko Haram fighters were still in the town. After they left, he was taken inside a house without any medical care for three years.

“Earlier in the year, we heard of his case and went to Chibok. We brought him to Abuja three months ago and started rallying people and organisations to sponsor his medication abroad.”