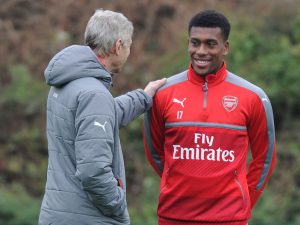 Arsenal head coach, Arsene Wenger, has urged Nigerian youngster, Alex Iwobi, to add more goals and assists to his game and improve, as he feels the future is bright for the winger, if only he keeps his focus and mentality intact.

Iwobi, since his promotion from the club’s academy has been an integral part of the team, but has scored a miserly five goals in 41 English Premier League games, a situation Wenger doesn’t want to see continue for the 21 year old.

“I like the fact that he can play in tight areas, that he turns the game forwards, that he’s very mobile,” Wenger told the club’s website.

“We forget sometimes that Alex is still a very young player and that there’s a lot more to come from him.

“There must be a lot more to come from him because he has more personality in the game now.

“We expect him to be more efficient in the final third offensively, because you feel there are goals in there and assists too.

“They have to come out. Add that to the fact that he allows the team to play very well and he will be a top-class player.”