Home News Feed Read How Monkeys ‘Die From Heart Attacks’ | Photo
Facebook
Twitter
WhatsApp
In a shocking incident, about 12 monkeys have died of heart attack after they were scared by a tiger in India. 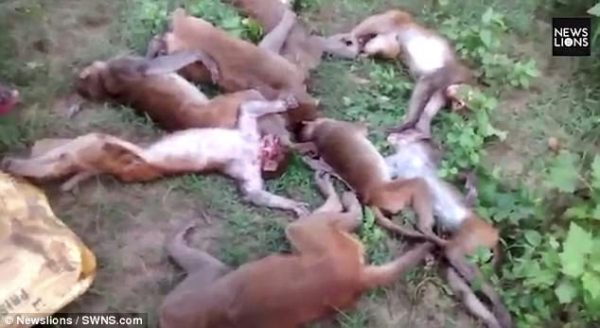 Twelve monkeys ‘died from heart attacks after they were scared by a tiger’ in Indian forest, Dailymail has reported.
The incident happened in a forest in India – with veterinary experts claiming they suffered simultaneous heart attacks after they were scared by a tiger. Locals discovered the monkeys in a forest clearing and were initially baffled by the apparent mass death. Suspecting the mammals had been poisoned, postmortems were carried out which reportedly revealed they all had heart attacks at the same time.
Vets in the Kotwali Mohammadi area of the northern Indian state of Uttar Pradesh carried out investigations. Vet Dr Sanjeev Kumar said: ‘It was confirmed in the post-mortem report that the monkeys died due to cardiac arrest.
‘The monkeys could have died due to tiger’s roar as tigers often traverse that area.’ Forest department workers found the monkeys on Monday and an upsetting video shows them stuffing the bodies in polythene bags.
Villagers reported tigers are often in the area and were heard roaring at the time of the deaths. The claim of a mass heart attack has been criticised by wildlife experts, however, who suggest the animals were more likely to have died from an infection.
Dr Brijendra Singh, a veterinarian, told the Times of India: ‘Monkeys are a wild animal and they don’t die in this manner. All the monkeys might have been suffering from some infection that claimed their lives.’
Watch video below: