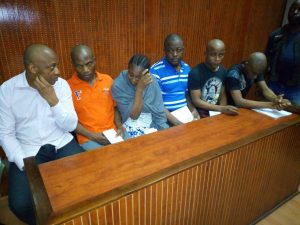 The Lagos State High Court in Igbosere has fixed November 10, 2017, for  the next hearing of  Chukwudumeme Onwyamadike aka Evans over the alleged murder and illegal sales of firearms charges filed by the Lagos State Directorate of Public Prosecutions.

Justice Oluwatoyin Taiwo fixed the date on Friday after hearing two applications filed by Evans, through his lawyer, Mr. Olukoya Ogungbeje, challenging the competence of the two fresh charges and seeking to quash them. Justice Taiwo had then adjourned till Friday to entertain the applications.

The two fresh charges are different from one involving kidnapping, in which Evans and his co-defendants were earlier arraigned on August 30, 2017, before Justice Hakeem Oshodi of the Ikeja division of the court.

Moving the applications on Friday, Ogungbeje described the new charges as an abuse of court processes, contending that some of the counts bordering on kidnapping were merely a duplication of the ones filed before Justice Oshodi in Ikeja.

He also challenged the jurisdiction of the court to entertain the murder and firearms charges filed against his client, saying they were federal offences which a state high court could not entertain, contending that the Lagos State DPP had not obtained the fiat of the Attorney General of the Federation to be able to prosecute murder and firearms offences.

He also said there was no need for the court to proceed with the trial of the case as there was no evidence to support the murder charges.

Two of the counsel for Evans’ co-defendants, Ogedi Ogu and A. B. Josiah, adopted Ogungbeje’s arguments and urged the court to quash the charges and free their clients also.

But the Lagos State Director of Public Prosecutions, Ms. Titilayo Shitta-Bay, said the applications by the defence counsel stemmed from a misconception of sections 153 and 154 of the Administration of Criminal Justice Law of Lagos State, which, she said, guided the filing of charges.

She said the state decided to file separate charges in order not to complicate its case, adding that the strategy adopted by the state was allowed by the law.

She also said contrary to Ogungbeje’s argument, the Lagos State DPP had since January this year secured a general fiat of the AGF to prosecute federal offences.

After hearing all the parties, Justice Taiwo adjourned till November 10, 2017, for the ruling.