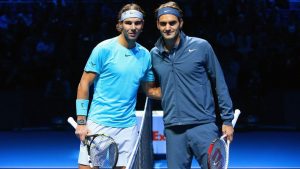 Federer has a 14-23 head-to-head disadvantage against the Spaniard but he has won all three times they have met in 2017.

First, it was the final of the Australian Open, which he won in five sets then the Miami Open, where Federer blitzed Nadal 6-3 6-4.

Federer also beat Nadal in the round of 16 at the Indian Wells Masters. For Nadal, beating Federer in Shanghai on Sunday would mark a remarkable turnaround in his 2017 fortunes.

After reaching the Australian Open final and losing to Federer, he lost his second final, at the Mexican Open, to Sam Querrey and then lost another final to Federer at the Miami Open.

His fortunes seemingly turned with the clay court tournaments as he won his 10th titles at Monte Carlo and Barcelona Open tournaments.

He then proceeded to win the French Open title for the 10th time.

Federer, on the other hand, was picking and choosing his tournaments after an injury-hit 2016. And the wisdom paid off magnificently at Wimbledon, where he won his eighth title and his 19th Grand Slam.

The two players have qualified for the season-ending ATP Tour Finals, which is scheduled to hold between the 12th and 19th November at the O2Arena in London.