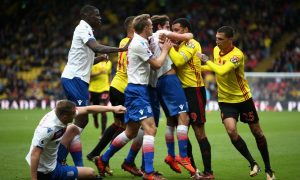 Watford Captain, Troy Deeney has been handed a  three match ban for violent conduct during last Saturday’s clash with Stoke, as announed by the Football Association announced on Tuesday.

The 29-year-old — whose club and Stoke were charged by the FA on Tuesday for failing to control their players — admitted to the offence which saw him press his thumbs into the face of Joe Allen.

Welsh international Allen had reacted angrily to Deeney for perceived unsportsmanlike behaviour when the Watford forward tried to cross the ball into the Stoke penalty area rather than hand back possession after a Stoke player had put the ball out of play because a player was lying on the ground injured.

Both players were booked but Deeney — Watford’s captain — subsequently was charged by the FA over the incident.

Deeney will miss the Premier League matches at Everton on November 5, West Ham’s visit on November 19 and the trip to Newcastle on November 25.

Both teams have till 6pm on Friday to appeal the decision.