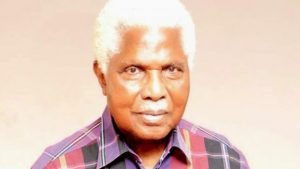 Former Nigeria Vice President, Dr Alex Ekwueme, who is currently on admission in Memfis Hospital for Neurosurgery, Enugu is reported to be in stable condition.

An aide of the former vice president, who spoke to newsmen on condition of anonymity, said that his boss was responding to treatment.

When the News Agency of Nigeria visited the hospital, the manager said that it was against the practice to give out information about patients.

Meanwhile, the family of the former vice president had in a statement thanked members of the public for their concern on the health of their father.

The statement signed by the traditional ruler of Oko, Prof. Laz Ekwueme, said that the former vice president would remain under close medical attention.

The former Vice President was on Oct. 29, hospitalised for alleged chest infection.

“Ekwueme had a quiet celebration of his 85th birthday on Oct. 21 in the company of his family members and he remained in high spirits up till his recent health challenges.

“His doctors confirmed that he is stable, but he will remain under close medical attention in the meantime.

“The family requests the sustained support and prayers of Nigerians as he continues to make a full recovery,” Ekwueme said.

Meanwhile, the All Progressives Congress (APC) Chairman in Abia, Chief Donatus Nwankpa, has called on the Federal and South-East state governments to rally round the former Vice President to ensure he gets proper medical treatment.

“Ekwueme is a national figure. The Federal and the South-East governors should rally round the elder statesman to ensure that he gets the best of treatment.

“He was vice president under Alhaji Shehu Shagari in 1983. Most of the Federal Government colleges were built under his watch and at a minimal cost.

“The former vice president has never been indicted for any corruption. Ekwueme’s issue transcends party politics.

“I call on the Federal Government and the five south-east governors to urgently move in and intervene to ensure that he gets the best of treatment anywhere in the world.’’