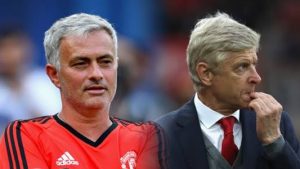 Arsenal boss Arsene Wenger, speaking ahead of the game against Manchester United says he is expecting, Jose Mourinho to set his team up defensively when the sides clash on Saturday despite his reputation for “parking the bus” in big matches.

United travel to the Emirates Stadium sitting second in the Premier League and on the back of a 4-2 win at Watford in midweek.

But Mourinho has yet to win an away game against a fellow “big six” side since taking charge at Old Trafford, with seven games at Chelsea, Arsenal, Manchester City, Liverpool and Tottenham yielding just three points and one goal.

That run includes a 2-0 defeat at Arsenal last season as Wenger recorded his first competitive victory over Mourinho at the 16th attempt.

The pair have shared a tumultuous relationship over the years but Wenger does not believe Mourinho, renowned for his defensive tactics in such matches, will only be eyeing a clean sheet in north London this weekend.

Asked whether he expected Mourinho to park the bus with a defensive outlook on Saturday, Wenger replied: “No, I don’t expect anything special.

“I just expect us to be ready to recover now. Man United is a strong team and I expect us just to cope with the problems they will give us. They will attack as well. They will not only defend.

“It is a game between Arsenal and Man United at home. I just want to focus and to prepare well my team, and give my team a good chance to win the game.

Victory in the north London derby at home to Tottenham was followed up with a last-gasp win at Burnley before Huddersfield were dispatched 5-0 at the Emirates on Wednesday.