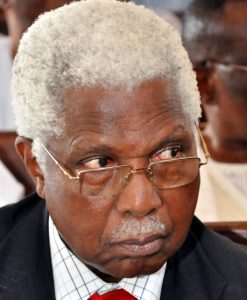 Indications emerged on Wednesday that the Enugu State Government has made arrangements to fly a former Vice-President, Dr. Alex Ekwueme, out of the country for medical treatment.

The second republic Vice-President is currently at the Intensive Care Unit of Memfys Hospital for Neurosurgery, in Trans-Ekulu, Enugu, after collapsing at his residence in the Independence Layout area of Enugu on Saturday.

A source in the Enugu State Government House informed our correspondent on Wednesday that the state government had made arrangements to fly Ekwueme out of the country, for medical attention in an undisclosed country.

Although the source did not disclose the particular country and hospital where the elder statesman would be flown to, he explained that relevant officials of the state government had contacted Ekwueme’s personal physicians in order to arrange the planned medical trip.

“The Enugu State Government is making arrangements to fly him (Ekwueme) out of the country to enable him to receive adequate medical attention.

“We have got in touch with his personal physicians to arrange the trip. He has doctors who have been attending to him before now, so we are arranging everything.

“The governor (Ifeanyi Ugwuanyi) has already visited him in the hospital and he is doing everything within his powers to ensure that Ekwueme recovers,” the source said.

However, our correspondent learnt that plans to fly the former Vice-President out of the country might be put on hold until his condition stabilises.

It was gathered that Ekwueme is still in coma.

A source in the hospital informed our correspondent on Wednesday that the doctors were battling to stabilise the octogenarian, who marked his 85th birthday on October 21.

The source explained that the elder statesman might not be flown abroad until he comes out of coma.

He said Ekwueme was receiving adequate attention in the hospital.

“The doctors are working round the clock to stabilise him. We understand that there are plans to fly him abroad, but that would be when his condition stabilises.

“He is still in coma; he has to be stabilised before embarking on any foreign medical trip.

“The doctors are working round the clock to ensure that he pulls through,” the source said.

Relevant officials of the Enugu State Government were not willing to speak on the record concerning plans by the state government to fly Ekwueme abroad for medical treatment.

When contacted by our correspondent, the Senior Special Assistant to the Governor on Media and Publicity, Mr. Louis Amoke, said he was at the State Executive Council meeting, and as a result, could not comment on the matter.